Bishop Richardson, leader and spiritual voice in the community, dies

Bishop James Richardson, former pastor of Saints Delight Church in Albemarle and a steady and reliable presence in the community for more than half a century, died earlier this week. He was 78.

No specific cause of death was mentioned in his obituary.

In addition to his ministerial position within the church, Richardson also served in the U.S. Army, was a chaplain with the Albemarle police and fire departments and volunteered his time with many local organizations.

“Bishop Richardson was quite a legend and a well-known leader in the Stanly County area,” said Gwendolyn Holland, pastor of Sanctuary Christian Outreach Ministry, who spent many years working alongside Richardson when he served as chairman of the South Albemarle Ministerial Alliance, a network of about 15 churches of varying denominations that he co-founded in the late 1980s.

She mentioned that even though he had an large role within the county, he always remained humble and even liked to crack jokes to make people laugh whenever he entered a room.

Albemarle Fire Chief T. Pierre Brewton fondly recalls that Richardson, who served as a chaplain for the department shortly after Brewton created the program in early 2020, had such a “deep-seated laughter” that he was always instantly identifiable.

“Nothing was going to faze him or his laugh,” he said.

“He’s not going to make light of a situation, but what’s he’s going to do, he’s going to deescalate the situation and put people back into the conversation mode,” Brewton said. “He takes away the hostility, the ego, all those other things that bring about a hostile environment…to bring people back to a common sense approach moment.”

Brian Johnson, pastor at Perfecting Life Global Ministries who also served as a police chaplain with Richardson, said he “had a sense of humor like no one’s business” and he was a consummate jokester. 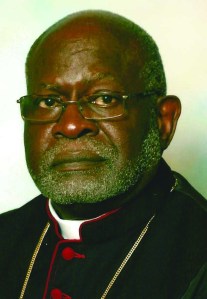 Bishop James Richardson, former pastor at Saints Delight Church in Albemarle, passed away this week at 78.

Born and raised in Albemarle, Richardson, who was known to many throughout the county as “Jamie,” had always felt a strong connection to the church, even at a young age, according to both his obituary and people close to him.

Long-time friend Brenda Stanback said that even when they were children, establishing a strong connection with Christ was always paramount to him. While most kids enjoyed playing ball outside, Stanback said, “Jamie always wanted to have church with us.” He would often calmly interrupt their games, and with a book he substituted as a pretend Bible, he would would preach to his makeshift congregation.

“Jamie was the preacher,” Stanback recalls, “even when he was young.”

“Whether he was at church, in school, or in the community,” according to his obituary, “it was obvious to those around him that the anointing of God was upon his life.”

After graduating from Kingville High School, Richardson accepted the call into the ministry and preached his first sermon at Saints Delight in 1963.

Several people mentioned how Richardson was always there for people in the community who might have needed a comforting word or a prayer, regardless of whether they were members of his congregation.

“The loss of Bishop James E. Richardson presents a very solemn moment for our entire community,” said Albemarle Councilman Dexter Townsend. “I’ve never known one man that has impacted so many lives in some manner. He was a leader amongst leaders; man amongst men; and pastor amongst pastors.”

Johnson said that in the eight years he knew Richardson, he viewed him as the standard that he was always aspiring to emulate.

“He was clergy beyond the pulpit,” Johnson said, noting he was the epitome of going outside the church walls to make a difference in people’s lives.

Richardson spent 40 years as pastor of Saints Delight Church. He also spent time as pastor at several other churches throughout his life including Saint Matthew United Church of God in Oakboro. He was consecrated to the Office of the Bishopric in 2008.

After 58 years of preaching, including 48 years of pastoral ministry, Richardson retired from ministry in November 2019.

He lived in Jamestown with Peggy, his wife of 55 years, and was a member of Mount Zion United Church of God. Aside from his wife, Richardson is survived by his two children, Byram and Kelita, two granddaughters and two great-granddaughters.