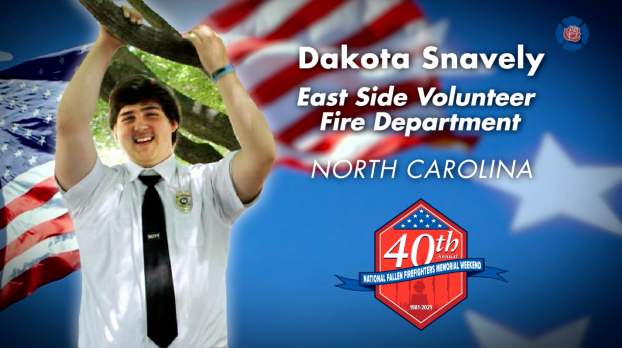 Firefighter Dakota Snavely of the East Side Volunteer Fire Department was one of eight fallen North Carolina firefighters that were honored during the 40th Annual National Fallen Firefighters Memorial Weekend Oct. 2-3 in Maryland.

Snavely died in a motor vehicle accident in 2018 while responding to a water rescue, a week shy of his 18th birthday. He was a firefighter for East Side where his father, Jimmy Ross Snavely, also served as a captain.

Last Saturday, the families of America’s fallen firefighters gathered for a candlelight service, when a plaque bearing the names of the fallen was added to the National Fallen Firefighters Memorial in Emmitsburg, Maryland. The next morning, Fire Hero Families participated in the memorial service to honor the sacrifices of their loved ones at the National Memorial.

The names of 215 firefighters, including Dakota’s, were made a permanent part of the National Memorial in honor of their sacrifices.

“Across our nation, bells are ringing in recognition for the sacrifice your loved ones made,” said Troy Markel, chairman of the National Fallen Firefighter Foundation’s board of directors. “People everywhere understand that their communities are made safer by firefighters just like yours.”

Congress created the National Fallen Firefighters Foundation to lead a nationwide effort to honor America’s fallen firefighters, according to a press release. The organization’s mission is “honor and remember America’s fallen fire heroes, provide resources to assist their families in rebuilding their lives, and work within the fire service community to reduce firefighter deaths and injuries.”

The video of the memorial is posted on the NFFF’s website and at the one hour and 35 minute mark, Dakota’s name is mentioned and his photograph is posted.

Dakota was included in the 2020 Roll of Honor, which featured biographical information about firefighters who died in 2019 and in previous years.

He began volunteering at the department at 15, according to information posted on the NFFF’s website, after watching his father train and respond to calls. When not around the department, he enjoyed playing baseball, hunting, fishing and grilling out with his family. The website also described Dakota as someone “with a very giving spirit” who “would easily lay down his life for a friend.”

“To know Dakota is to know that he loved life, his family and friends, and the fire service,” the post about Snavely concluded.

In May 2019, Dakota was recognized as the 294th firefighter to die in the line of duty at the North Carolina Fallen Firefighters Memorial Service.

Jimmy Snavely, his father, was at the ceremony, and was presented with a rose and an American flag that had been flown over the National Fallen Firefighters Memorial and the U.S. Capitol. He saw his son’s name on the memorial plaque and received a brick engraved with Dakota’s name. 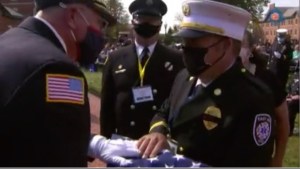 Screenshot of Jimmy Snavely accepting the American flag on behalf of his late son Dakota, who was a firefighter with East Side Volunteer Fire Department.

“It was a very emotional weekend,” he said, noting he met several other family members from across the country who also lost loved ones in the line of duty. They talked, shared stories, cried together and leaned on each other for support. Snavely also spoke with other fathers of fallen firefighters in a small group which helped provide him with a bit of closure.

“It’s very nice and it’s kind of warming to know that you’re not in this alone,” he said.

He was also paired with a family member of a fallen firefighter from Ohio who had previously attended the ceremonial weekend and who was available for support and to help him process what was happening.

“The person that’s there with you, they’ve experienced it so they know what you’re going through,” he said, noting he was asked and plans on attending next year’s event to provide support to new families.

Since his son died, Snavely, who works at East Side and Millingport volunteer fire departments, has become president of the local Red Knights chapter representing Stanly, Cabarrus and Montgomery counties. A motorcycle group comprised of law enforcement and first responders, they organize rides to raise support for first responders and others in the community.

Even though he developed connections with other grieving families, the loss of his son still hurts.

“The children are supposed to bury the parents, not the other way around,” he said.