Airport utilizes new technology to beef up its security 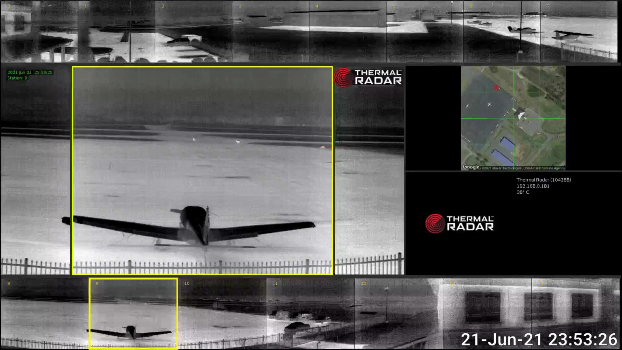 Thermal Radar has provided the Stanly County Airport more awareness of what's happening at night such as deer roaming along the taxiway. Photo courtesy of Ken Swaringen.

The Stanly County Airport beefed up its security in recent months as perimeter protection technology was installed in the form of a single spinning sensor from the company Thermal Radar, which can detect threats hundreds of meters away from all directions.

Airport Director Ken Swaringen, who used to work for security companies, was approached by one of his longtime friends, Steve Mann, a sales manager for Thermal Radar. The company, which is headquartered in Utah, had just removed a demo unit from the Knoxville Airport and Mann inquired if Swaringen would be interested in utilizing the security technology at his airport.

“He called me and said, ‘Would you be interested in putting this up and trying it?’ and I said sure,” Swaringen said, noting the technology was installed free of charge in the early spring.

Since the airport already had security cameras, the installation of the sensor was more about testing out the product for the company and making sure it was operating correctly than it was about mitigating actual security threats.

“This was an add-on to what we had and it was through a working relationship from years ago that we were able to do that,” Swaringen said.

The thermal radar is mounted on a tower adjacent to the main terminal. The technology interfaces with the airport’s video systems through its security cameras. 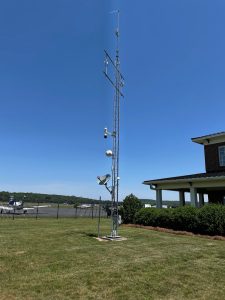 The Thermal Radar sensor is mounted to a tower outside the main terminal. It can detect potential threats hundreds of meters away. Photo courtesy of Ken Swaringen.

Swaringen said the images the technology produces at night has been especially impressive and helpful. The extended security coverage has allowed the airport to detect certain happenings — such as deer roaming along the taxiway or a helicopter stopping to refuel — that it likely wouldn’t have known about otherwise.

“Things like that are good to capture because deer and airplanes don’t mix,” Swaringen said. “We provided that to our wildlife person so he would know they are out here sometimes.”

Swaringen said he’s not aware of any other airports in the state that have utilized thermal radar technology on premises. It’s mainly been used to enhance security for companies with lots of land area such as trucking facilities, warehouses and shipping docks, he said.