When Eargle accepted Pfeiffer College’s offer to become its seventh president, he was serving his sixth year as the superintendent of the Winston-Salem/Forsyth County Schools. The Winston-Salem Journal ran a special column entitled “Zane Eargle: Six Years of Low Profile and High Competence.” The article detailed many of Eargle’s accomplishments – one of them was improved access to secondary education for all people, regardless of socio-economic status – and it was clear that Pfeiffer had secured the services of a man and a family who cared deeply about young people and about education.

What happened in the next decade, however, was truly unprecedented in Pfeiffer’s history and could not have been completely foreseen.

This month, Pfeiffer remembers a leader under whom the University experienced unprecedented growth. Even as he led record expansion, Eargle recognized that Pfeiffer should never become so large that it loses a sense of what has made it great – a culture of mentoring, of listening and of producing graduates who have impacted the world from the Capitol in Raleigh to classrooms, churches and hospitals all over North Carolina, and even to the rocky shores of Ireland.

“We have lost a legendary figure in Pfeiffer’s history, a tremendous leader and advocate for church-related education,” said Pfeiffer president Dr. Scott Bullard in late October, shortly after news of Eargle’s passing was relayed to Pfeiffer’s Board of Trustees at their annual fall meeting. During the beginning of that meeting, they remembered Eargle through narratives offered by trustees T. Rann Paynter ’92, past chairman Marshall Rogers, current chairwoman Joy Thornburg Melton ’77, and Dr. Chris Bramlett, a current trustee emeritus who served Pfeiffer as chairman during the Eargle administration.

Eargle was a man of vision, one who loved the nurturing environment offered on Pfeiffer’s traditional Misenheimer campus, but one who also saw long before many of his peers and competitors that Pfeiffer could prosper if she would continue to “think outside of the box” and – in concert with research he had published in the 1960s – make education accessible to persons who could not come to Misenheimer and other campuses due to familial and professional circumstances. Thus, Pfeiffer went to them.

The results were astonishing. Under Eargle’s leadership, Pfeiffer’s enrollment more than doubled. It evolved from a college into a university, a move that was supported by substantial growth in graduate programming. Eargle grew the University’s graduate offerings from one to four master’s programs and acquired a Charlotte campus that catered to working adults. The University also began providing graduate education at several locations across North Carolina, a crucially important development at a time when online instruction had yet to dominate the educational landscape for students pursuing master’s degrees.

As a direct result of these efforts, the University’s financial picture also improved dramatically during Eargle’s presidency. The enrollment not only jumped from 874 students to more than 1,800, the endowment tripled – rising from $3 million to $9 million. The Legacy for Tomorrow fundraising campaign was launched and provided support for campus renovation and maintenance, increasing the endowment, retiring debt and supporting the annual fund. 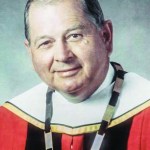 Underpinning Eargle’s success in fundraising was an ability to form, renew or cultivate relationships with donors and potential donors, and to facilitate Pfeiffer’s growth across North Carolina while also remaining focused on improving the facilities and experience in Misenheimer. He introduced “Tom Sawyer Days,” an all-volunteer effort in which the University’s key stakeholders came together to repaint or refurbish every building on its Misenheimer campus. The effort became a meaningful way to re-engage alumni in the advancement of Pfeiffer.

In Spring 1998, when Eargle relinquished the Pfeiffer presidency, Tom Grady ’63, who then chaired Pfeiffer’s Board of Trustees, said: “Pfeiffer has never been in better shape, both financially and from an enrollment perspective. The staff, faculty, and administration are all stronger for (Eargle) having been here.”

Eargle also left a permanent mark on Pfeiffer’s Misenheimer campus in partnership with his wife, Joan Eargle. Together, they built the landscape design, including the crepe myrtle-lined highway and greenery throughout campus, which is a hallmark of the campus today. Joan also played a leading role in such initiatives as the formation of the Friends of the Library and the creation of a now-iconic sculpture of Emily Prudden near the entry of Pfeiffer’s Misenheimer campus. Prudden (1832-1917) founded several schools in western North Carolina, including Oberlin Home and School, which eventually became Pfeiffer College.

Eargle valued Pfeiffer’s ties to the United Methodist Church and worked hard to strengthen them. He also knew that the young people who attended smaller universities in the 1980s and 1990s hungered for mentors who not only had strong academic credentials but also a deep love for students. Such mentors would seize upon every opportunity to help students understand their gifts in relation to the world’s needs.

Eargle hired faculty and staff who embodied this ideal. And he and Joan, who are both honorary members of the Class of 1990, embodied it personally.

“I recall with fondness that the Eargles hosted student government leaders and others for meals in the president’s home, and that the discussions that students shared with them were characterized by honesty and joy,” said Board member Rann Paynter. “Dr. Eargle and Joan had a true willingness to listen and respond to student concerns in a clear, practical manner.”

All told, Zane Eargle worked 41 years in education. He held several administrative posts, including that of associate dean of the School of Education at UNC Chapel Hill. As superintendent of the Winston-Salem/Forsyth County Schools, he was credited for rising graduation rates and other improvements over a six-year period in office.

“For all the positions he held and all of the lives he impacted, Pfeiffer is grateful,” Bullard said. “We are especially grateful, however, that the Eargles brought their extraordinary vision and their deep love for students and education to Pfeiffer. Because they chose to do so, we are a stronger university that has retained a commitment to being a nurturing university. May God continue to bless and keep the Eargle family.”

Memorials may be made to The Zane and Joan Eargle Endowed Fund, which was established at the time of Dr. Eargle’s retirement to support the University’s Division of Education.