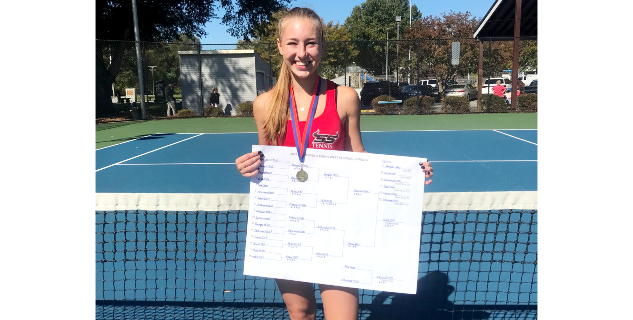 Jacy Noble, a senior at South Stanly High School, won the 1A Western Regional singles tennis tournament this past weekend.

Noble earned a berth to the tournament by winning the Yadkin Valley Conference 1A tournament last weekend at J.M. Robinson High School and was named to the all-conference team for the fourth straight year.

Along with tennis, Noble ran cross-country for South Stanly this year, garnering All-Conference all four years of her career.

The 1A Western Region comprises 10 1A conferences and 54 schools.

She defeated No. 1 seed Lindsay Bergelin from Bishop McGuinness in straight sets, 6-3 and 6-0 to capture the title.

Noble won all four of her tournament matches in straight sets to claim the crown.

Dana Bowers in 1998 was the last player from South to win the Western Regional title.

Noble will represent the West Region in the NCHSAA 1A state championship as the No. 1 seed for the region.

The state championships will be played Friday and Saturday at the Cary Tennis Park.