PEEKING INTO THE PAST – Memente Moria 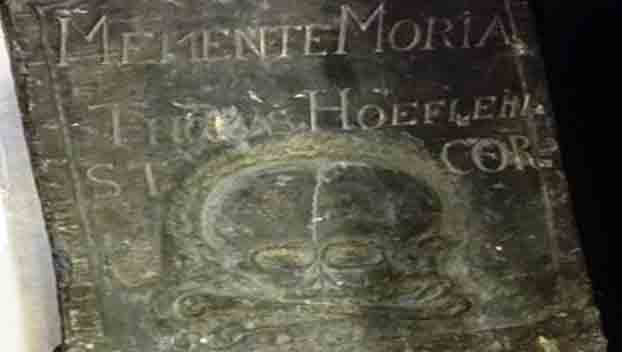 During the mid to late 1920s, a gravestone was uncovered behind Central Methodist Church. The stone is inscribed with the words “Memente Moria” and “Thomas Hoeflein.”

According to accounts, during the 1860s there was a carpenter who made coffins living in a home next to the church. In addition, there was a small cemetery located behind the church.

It is possible there is a connection, but the origin of the stone is not known. Another local mystery was the discovery of a skeleton in the old Stanly County Courthouse.

It was reported in 1968 by a carpenter named Dan Poplin that he was one of the workmen during the 1920s renovation of the local courthouse that found a skeleton in the attic.

The men at the time were unsure what to do with it so they placed it between an old floor and a new one that was being installed.

Newspaper accounts from 1926 confirmed that a skeleton had been found in the courthouse attic. The Stanly News-Herald interviewed a number of the local “old-timers” and several theories of the skeleton’s origin were proposed.

Why the skeleton had been stored in the courthouse will likely never be known.