A new cycle of art songs has come to Pfeiffer 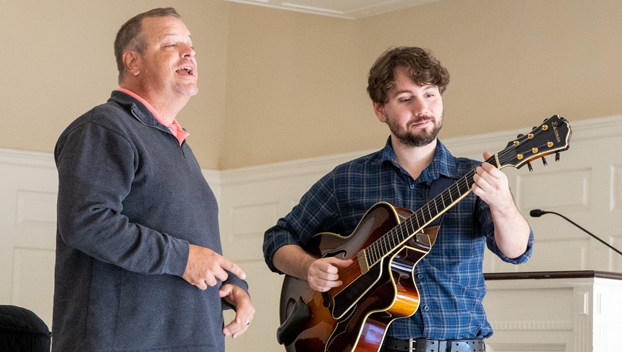 In the 19th century, several composers in the German-speaking world made their mark with the art song, a vocal genre in which poetry is set to music for a solo vocalist and piano. Franz Schubert (1797-1828) wrote over 650 art songs, setting a standard that has inspired everyone from Robert Schumann (1810-1856) to composers now, including Dr. Brent Lawrence (Class of 2013), a guitarist who teaches music at Pfeiffer University.

Lawrence recently wrote “A Wordsworth Triptych: Three Songs for Baritone and Electric Guitar,” with each song featuring a different poem by William Wordsworth (1770-1850), a founding and central figure of English Romanticism. Joe Judge (Class of 1987), a baritone who serves as Pfeiffer’s director of vocal and choral music, and Lawrence have just made a recording of Triptych, which is available on Spotify and YouTube.

Triptych is the second song cycle composed by Lawrence, who majored in music at Pfeiffer. It finds inspiration in songs by Schubert and Schumann, but aims “for an aesthetic that is slightly more contemporary than that of those composers,” Lawrence said. The aesthetic eschews the piano, which Lawrence does not play, for the guitar, which he does, often in venues where jazz, blues and folk are performed.

The poems in Triptychare (in order of appearance) “There was a Boy”; “A Night-Piece”; and “I Wandered Lonely as a Cloud.” Lawrence sees them as “somewhat autobiographical” and, therefore, wanted “to arrange them in a chronological narrative and perhaps a progression through a thought process or reflection that Wordsworth was writing about.”

The song featuring “There was a Boy” recounts a boy’s closeness to nature, how he communes with its inhabitants, and the moment when he is taken from his mates. In the song featuring “A Night-Piece,” the perspective shifts to the night sky, with the boy, now a traveler, making his way through the night, first noticing the clouds and then how they part to reveal the moon and stars as they shine in the night sky. And in the final song, which features “I Wandered Lonely as a Cloud,” the traveler compares his lonely wandering around his boyhood home to the clouds passing above.

Judge was particularly taken with the final song, in which the poem, sometimes called “Daffodils,” paints a vivid picture of seeing, as if from a cloud, a large patch of daffodils dancing along the bank of a lake.

“I think Brent did a terrific job of setting the text musically, particularly in contrasting sections,” Judge said. “The guitar and the voice together present a musical picture of thousands of daffodils moving in the breeze, outdoing the waves on the lake.”

If all goes as planned, A Wordsworth Triptych will be the first of many pieces that Lawrence writes for Pfeiffer’s music faculty. Judge is certainly on board with that.

“I’m very proud of Brent and the work he has done,” he said. “I’ve had the pleasure to watch him grow and develop as a musician since his freshman year at Pfeiffer to his coming full circle, as one of our best faculty in the Music Department. So, needless to say, it was my honor and privilege to be asked to sing these pieces.”