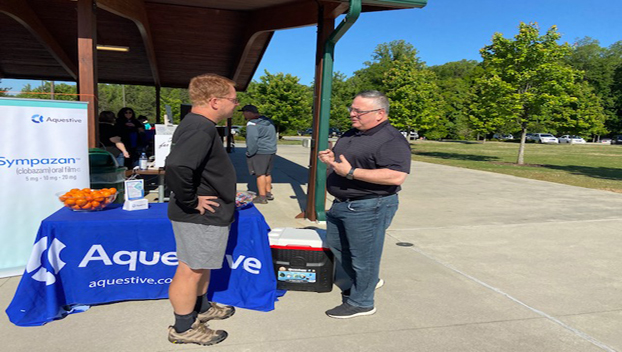 November is National Epilepsy Awareness Month. Nationwide, nearly 3.5 million people live with epilepsy and of that number, 470,000 are children. The CDC estimates North Carolina cases of active epilepsy at about 110,000, with children accounting for more than 15,000 cases. These statistics only hint at the numbers of lives affected by this neurological condition — physically, emotionally and financially. Friends, co-workers, family members and neighbors in Stanly County have stories to tell, but many are reluctant to speak of the challenges they face.

In some ways, the condition is invisible, until it’s not. An “unexpected electrical storm” in a person’s brain brings on responses like a staring spell, or a stiffening of muscles, or all over shaking. Sometimes a person is awake, but more often not. Fifty percent of the time the cause of the seizure is unknown.

According to EANC, anyone can experience a seizure, and many who do, have only one.

Epilepsy is usually diagnosed after two seizures which are not caused by an already known medical condition. Birth injury or early-life brain damage can cause seizures for children. Head trauma, or illicit drug use, can bring on the neurological condition in young adults. Strokes are the most common cause for adults over the age of 50.

In 1979, Patricia A. Gibson established the Epilepsy Helpline, operated through the Epilepsy Information Service (EIS) at Wake Forest School of Medicine. From the 8,000 to 10,000 calls a year from all over the nation, Gibson’s documentation has shown the primary need of many North Carolina callers is for help with medication expenses, which can easily run to more than $1,000 per month.

When Gibson began documenting the financial need of families, she worked with the North Carolina State Legislature to set up the Epilepsy Medication Fund. For 20 years, the state budget allocated $75,000 annually to help families with the cost of medicine. Even so, the need was much greater. In 2009 the budget funds were eliminated. Now, private sector donors are more important than ever for helping North Carolina families who live with epilepsy.

Gibson oversees the Helpline and has been executive director of EANC since the 1990s. She’s internationally known for her expertise about epilepsy and recognized for her efforts to improve the social care of people with epilepsy.

“Anyone can find themselves in a position of needing help, with just the right circumstances,” said Gibson in an email. She cites a 2007 Harvard study which revealed medical problems contributed to 62.1 percent of all personal bankruptcies, though 75 percent of these had health insurance. Neurological costs were among the highest, she said.

EANC seeks to raise awareness about the prevalence of epilepsy, as well as about the common need people have for help when purchasing costly medication.

Throughout 90 North Carolina counties, at least monthly, EANC fundraisers of all types call attention to this need. Gibson says Stanly County is dear to her heart for the contributions made through United Way.

More than anything, Gibson wants to help people in North Carolina.

“Lots of folks in your community may need this information, or help with their medication expenses, and not be aware of our resources,”’ said Gibson.

“Most seizures are controlled with medicine, but the medication needs to be taken continuously without interruption,” added Gibson. “Sometimes, folks choose between medicine and food.”

For more information about epilepsy and the help available through EANC, or what to do in the event of a seizure, call the Epilepsy Information Service at 800-642-0500. Information is also available at www.epilepsync.org.