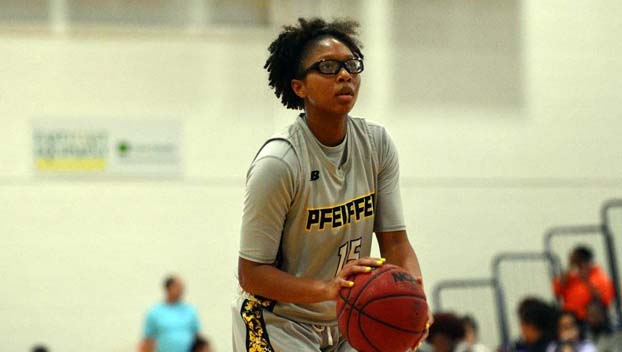 The women’s basketball team of Pfeiffer University finished 4-6 last season, which featured an abbreviated schedule of conference-only games because of the COVID-19 pandemic. But Head Coach Tooey Loy isn’t the least bit discouraged.

“I’m really fired up about this year’s team,” he said a few weeks before the Falcons’ season-opening game Nov. 6 against Hollins University. “We have a really good chance to make it to the NCAA DIII tournament.”

There are at least three reasons for Loy to feel optimistic about his players’ prospects as they embark on a full 27-game season this year.

First, several standout players of past seasons will be returning for a fifth year as a result of the NCAA’s recent decision to grant an extra year of eligibility to any student-athlete pursuing a full-time degree. They include Brina Bentley, a high-scoring forward who also rebounds well, and Shalonda Wilkins, a guard. Loy called Bentley, “our best player last year.” He praised Wilkins as “probably our best three-point shooter,” which should be a plus in an offense where “we’re going to shoot a lot of threes and a lot of layups.”

Other returning players who should have a positive impact will be guard Alexis Muriel and forward Mya Johnson, another fifth-year player who’s suffered several injuries during her college basketball career. Loy said that Johnson “has a chance to be Player of the Year” in the USA South Conference, of which Pfeiffer is a member, if she remains healthy.

Second, many of the 14 new players who are on this year’s roster are Division II-caliber athletes. Loy said at least 10 of them could play for him now.

Loy said this team is “even deeper” than the Pfeiffer team he coached to a 20-5 record in the 2017-18 season. During each game this season, 15 to 17 players should get playing time. Rotating squads of three or five players will try to wear teams down by pressing on made and missed shots, shooting within the first 15 seconds of the shot clock, and “really making it an up and down game.”

So, no games should be cancelled because of the pandemic, as was the case last season, when 10 of 14 originally scheduled games were played. And, thankfully, there shouldn’t be a repeat of last season’s two quarantines, each of which kept players isolated for 10 days. This left them one day of practice before playing two games over a weekend.