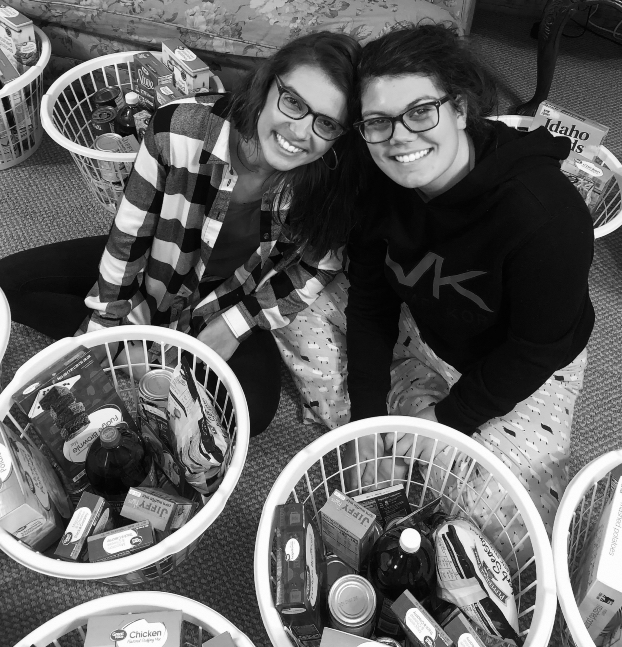 Kaylan and Karmin Roland have been distributing Thanksgiving baskets to struggling families since 2017. Photo courtesy of Kaylan Roland.

For each of the past four Thanksgivings, sisters Kaylan and Karmin Roland of Millingport have been collecting food and distributing baskets to families throughout the community as a way to ensure as many people as possible have access to warm meals during the holiday.

It’s part of their nonprofit organization, Sharing the Feast, that they created in 2017, shortly after the death of their father, Jeff Roland. A well-known member of the community, who often catered backyard events, he battled mental health issues and died by suicide in 2016.

Even after such a traumatic event, the sisters, both in their early 20s, wanted to find a way to take their grief and channel it in order to help others.

“After about a year had gone by, we wanted to do something in memory of him,” Karmin said. “And we had pondered and pondered and tried to figure out what that could be. And whenever we thought about our dad, we always knew that no matter what, he was always giving the shirt off his back to somebody.” 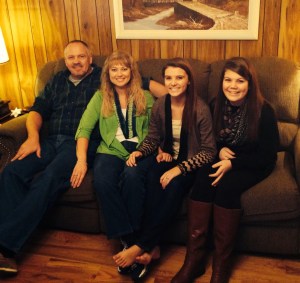 Kaylan and Karmin Roland along with their mother Kristy and their father Jeff. Photo courtesy of Kaylan Roland.

It was around Thanksgiving when the sisters, inspired by their father’s selflessness, decided to collect food to distribute. They initially expected to help out only a few families, but after posting about their plans on Facebook, they were flooded with canned goods, turkey, ham and other items along with monetary donations. They ultimately received enough food for 23 baskets.

Karmin and Kaylan, along with their family and friends, individually place the donated items into laundry baskets. Each basket typically comes with either a ham or turkey, three vegetables, potatoes, macaroni and cheese, bread, dessert and a drink.

The sisters partner with Stanly County Schools to identify students who could most benefit from receiving the baskets. They never know the identities of the students; they are just told how many baskets to send to each school. The students’ parents are then contacted and pick up the meals.

“It makes you feel good in your heart,” Karmin said about helping others. 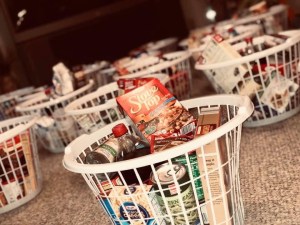 Laundry baskets filled with food are distributed to families to enjoy for Thanksgiving. Photo courtesy of Kaylan Roland.

With each passing year, the sisters have been able to distribute baskets to more families, thanks to the power of social media and the willingness of people to donate. Last year, due to the COVID-19 pandemic, the sisters mailed grocery store gift cards to 50 families. To date, the sisters have helped more than 150 families in the area.

“I think our goal is for everybody in Stanly County to have a warm plate on Thanksgiving day, no matter what that takes,” Kaylan said, noting that the meals are a way to bring families together. “If we provide the things that they need necessary for a meal, then they get to spend time together cooking that meal and just creating memories together.”

This year, instead of relying on social media, the sisters will host a fundraiser at Salem Methodist Church at 11 a.m. Saturday. For $8, people can purchase a plate complete with barbecued chicken, slaw, baked beans, bread, chips and a dessert. The proceeds will go to purchasing the food items for the baskets.

Additional money raised during the event will be donated to SIMS Consulting and Clinical Services in Kannapolis, which provides quality clinical services to individuals seeking outpatient mental health consultation and/or treatment — something very important to the Rolands.

“Having that light to shine, to carry my dad’s legacy, means the world,” Karmin said, noting she knows her father is proud of the work she and her sister have been doing with Sharing the Feast.

“It took a long time for us to come to terms with dad’s passing because it was so sudden and it was so tragic and there were so many people affected,” Kaylan said.

But they were able to transform that grief into positive action that has helped so many people.

“We were able to put our sadness and our hardships behind to put people that we don’t even know before us…and to let them know that, ‘Hey you’re loved,’ ” she added.