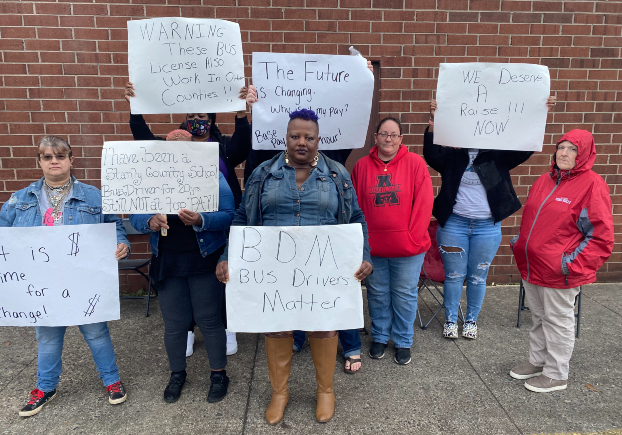 Bus drivers came out before the school board meeting Tuesday with signs calling for increased pay and more respect.

Following two days of protesting outside Stanly County Commons, bus drivers went inside Tuesday night to address the Stanly County School Board with their concerns about compensation.

About half a dozen drivers spoke as part of their ongoing protest to demand increased pay and recognition for the work they have been doing on the frontlines over the past year and a half with the COVID-19 pandemic. They feel they have gone unnoticed by many within the school system.

The drivers, many of whom did not report to work Monday and Tuesday, specifically want their base pay to be increased from $13.07 to $16 and want a one-time Covid bonus.

At least a dozen bus drivers met outside the Gene McIntyre Meeting Room about an hour before the meeting to continue their protest. Many said they were tired of being told what they consider to have been empty promises over the years when it came to receiving pay increases.

“We do not get thanked for our job, period,” said Jeffrey Watson, who has been a bus driver for two and a half years. He said no one reached out to him with words of encouragement when he had to take a week off recently due to having Covid-like symptoms, nor did anyone send well wishes as his mother has been in the hospital this week.

“Nobody’s ever said, ‘Hey, you guys are doing a great job, we appreciate your effort,’ ” he said. “The money is important, but for me it’s the appreciation. I feel like we’re being taken advantage of.”

A few drivers met with Superintendent Dr. Jarrod Dennis on Monday and they said he told them the district would work to get them pay raises and other monetary incentives, but not until after Nov. 17, as the district is currently under audit.

Dennis said in an emailed statement Tuesday afternoon the school system is working on ways to “recognize and reward our employees for their continued efforts through the pandemic, including salary increases and monetary incentives” though it will take time to develop and will not happen “overnight.”

“Currently, we are experiencing disruptions in transportation that are impacting families, children, and classrooms across the district,” Dennis continued. “We hope that staff will pull together to resolve these disruptions, and provide normality for our students whose education has already been disrupted by the pandemic.  We value all of our employees, and continue to work on ways to recognize their hard work and dedication.”

Drivers speak out during board meeting

During the public comments section of the meeting, several bus drivers took the time to talk to the board members about how critical they and other classified staff are to the proper functioning of the schools.

“We like to do our jobs, but we want to be compensated more,” Carpenter continued.

While she acknowledged it will take time for the district to come up with the resources to reward the classified staff for their work, “we’re not willing to just lay down and be walked all over anymore.”

When the pandemic first began last year and students and teachers were working remotely, the bus drivers and other classified staff were at the schools daily feeding the community, Ashley Garner, a bus driver for more than a decade, told the board members, noting the classified workers developed a strong “sisterhood” during that time.

Many of them have responsibilities that go beyond their work duties, Garner said. For students that come from unstable family units, many of the drivers often act as surrogate mothers, going above and beyond to take care of them, including purchasing socks for students during the winter.

“Those people that have been here 20 years — how do you compensate someone for loyalty?” Garner added. “They need a pay increase, there needs to be a pay increase across the board.”

Every board member during closing statements offered words of support for the bus drivers and other classified staff. Many also said the district is working to figure out how to better compensate classified workers, though no details were provided.

“We definitely hear you and we’ve heard you for years,” board member Anthony Graves said. “The reality is every single person inside of Stanly County Schools as an employee certainly is not taken for granted although it may seem like that sometimes if you’re not directly referred to.”

The next regular school board meeting is scheduled for 7 p.m. Dec. 7 inside the Gene McIntyre Meeting Room.

Drivers unite around continuing the protest

Once the meeting ended, the bus drivers congregated outside and began discussing among themselves about what to do next. While the drivers appreciated the comments from board members, they wanted more details about steps that would be taken to address the issues they had raised.

Several drivers did not appreciate the fact that the school board could not offer specific plans to help classified staff yet they passed a motion allowing North Stanly High School to move forward in updating the foul ball netting for its softball field.

While several drivers intended to go back to work Wednesday, it was decided that the protest would extend for at least another day.