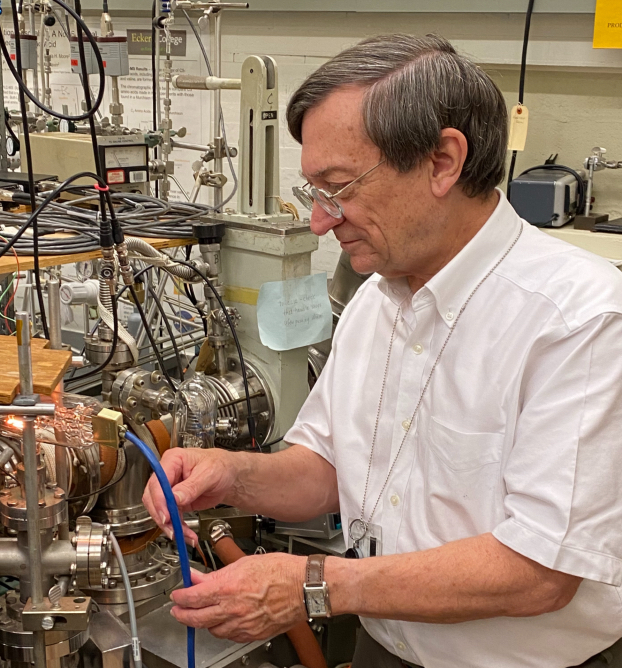 Reggie Hudson, who's an astrochemist at NASA, was the recipient of Pfeiffer University’s 2021 Distinguished Alumni Award. Photo courtesy of Reggie Hudson.

After graduating from Albemarle Senior High School in 1970, Reggie Hudson wasn’t sure where he wanted to go to college.

He seriously considered going to N.C. State University, but after much thought he  chose to remain in Stanly County, where he attended Pfeiffer College and double majored in chemistry and mathematics.

“It seemed like it was a better fit for me and in the long run I’m convinced that it was the right decision,” Hudson said about choosing Pfeiffer.

And judging by his career since leaving the school, it looks like he made the right call.

He is currently the lead scientist in the Cosmic Ice Laboratory of NASA’s Goddard Space Flight Center in Greenbelt, Maryland, where he studies the chemical composition of planets and other objects like meteorites and comets. He also spent 30 years teaching chemistry at Eckerd College in Florida.

Based on his many accomplishments, Hudson, who was the first in his family to graduate from college, was recently honored by his alma mater as the recipient of Pfeiffer University’s 2021 Distinguished Alumni Award. Hudson, upon receiving the award, also got to spend some time with his father, who still lives in Albemarle.

“I was very surprised…but I felt very honored,” he said about receiving the award.

Like many people growing up in the 1960s, Hudson was inspired by the space race and the Apollo program that led to the first humans landing on the moon.

“That was so much in the news and seeing space launches, it was a very exciting time and thinking back about it, it’s what really motivated me forward to a career in science,” Hudson, 69, said.

But like many people who grow up in a small community, Hudson struggled to imagine a world that extended beyond Stanly County.

“My horizon ended at the Cabarrus and Rowan county lines,” he said.

Hudson thought he could possibly become a science teacher, but as a young kid, he never dreamed of any sort of career beyond that — certainly not working at NASA.

“The idea that I would go on and be involved in some of the things I’ve had a chance to get involved with, it’s just hard to believe,” he said.

When it came time to prepare for life after high school, Hudson had a full ride scholarship lined up at N.C. State to major in textile chemistry. His plan was go to Raleigh for four years before coming back home to work at one of the many textile mills. But after visiting the campus, where he learned more about the Wolfpack’s football team than what he could expect as a freshman, Hudson came away less than impressed.

Hudson eventually changed course after he met with former Pfeiffer chemistry professors and toured the Misenheimer campus, which was smaller and more intimate than the one in Raleigh. Unlike the N.C. State visit, Hudson also appreciated that Pfeiffer officials focused on topics like undergraduate courses.

“I felt like they were targeting their effort toward me and my first-year experience,” Hudson said.

Though he admits that it was not a financially sound decision at the time to turn down a scholarship from N.C. State in order to attend Pfeiffer, where he submitted a late application, Hudson said over the long-term, he made the right decision. 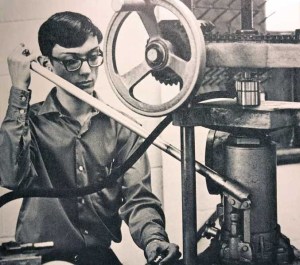 After graduating from Pfeiffer in 1974, he spent four years in graduate school at the University of Tennessee, where he received his Ph.D. in physical chemistry.

He then became a chemistry professor at Eckerd College, a liberal arts college in St. Petersburg, Florida. It was during this time that Hudson came to realize that working at NASA could become a reality.

After hearing about a summer internship with the space agency to work on a specialized project, he applied for the position and got the job. He initially worked a few months each year for NASA while committed to his full-time job with Eckerd, but he gradually began to spend more time with the agency and even took a year-long sabbatical from the college.

“The connection just kept getting stronger until it finally made more sense to just work at NASA full-time,” Hudson said.

He will always remember when he started working at NASA in Maryland in late January 2009 because it aligned with Barack Obama’s first full day in office as president.

“Barack Obama and I started in D.C. at the same time,” he said.

For the last 12 years, Hudson has utilized his background in chemistry to learn more about space, especially the other planets in the solar system.

The two big questions that Hudson deals with when researching other planets are what’s there? — in terms of chemicals — and how much?

With it likely being only a matter of time before humans embark on journeys to visit other planets, “you’d like to know something about the chemistry before you land,” Hudson noted.

What he enjoys most about working at NASA are the discoveries that he and his colleagues have made over the years.

“It seems like we find something new every time we turn around. Something new about the chemistry of another world that’s similar to the earth and then some day, it’s something that’s not similar to what we have around here,” he said. “So it’s the sense of discovery is what keeps you going.”

Hudson and his colleagues are currently working on measuring the amount of cyanide in the solar system and examining how long various chemicals can survive on different locations, such as Mars.

As for life on other planets? It would not surprise him if other beings exist though he thinks it would take a long time before any information of such magnitude is ever discovered.

“I have a hard time believing the earth is unique … but the universe is awfully big and to find those particular spots that have life is going to take a lot of patience,” he said.

In addition to his work at NASA, Hudson has chaired the American Chemical Society’s Astrochemistry Subdivision, served on the editorial board for the journal Astrobiology and authored or co-authored more than 100 publications, among other accomplishments. He’s also taught classes at the University of Maryland’s astronomy department.

Impact of Pfeiffer, Stanly County on his life

Hudson was first notified by Pfeiffer that someone had nominated him for Distinguished Alumni Award in the spring, but he didn’t pay it too much attention.

“There are a lot of good graduates at Pfeiffer and so somebody nominates you, I didn’t think too much about that,” he said. “I didn’t think that I would be the one that would receive the award this year.”

It wasn’t until August that Hudson received word that he would be receiving the award. He felt like he was able to represent both his graduating class and the professors who helped to shape him by accepting the award.

“I felt good … that I thought I was paying Pfeiffer back,” Hudson said about the honor. “In a sense, they went out on a little bit of a limb for me and I felt like I was showing them that they did right. I was paying something good back to them.”

Looking back on his life, he thinks growing up in a close-knit, small-town environment where people know and love each other provided the necessary encouragement he needed to pursue his dreams.

“Certainly there are teachers all over the country who encourage their students, but to have a community where people know each other, I thought was very good,” he said about growing up in Albemarle.