Friends remember Skidmore as a public servant, historian of Norwood

Raymond Skidmore Jr. was a fixture in Norwood. Friends of the Stanly County native say he could always be found helping others. 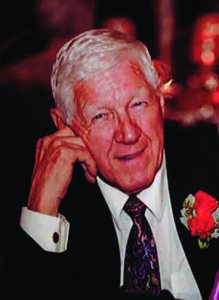 His parents, the late Raymond Skidmore Sr. and Margaret Payne Skidmore, were also deeply involved in the town.

His father once owned a grocery store, Bill’s Cash and Carry, in Norwood.

His mother was a Sunday school teacher for First United Methodist Church, according to Tammy Brewer, administrative assistant for the church.

Brewer grew up knowing about Skidmore but only grew closer to him in about the last 15 years.

Skidmore taught the Garmon Sunday school class and had served as a trustee, according to Brewer. He was also an usher.

Skidmore’s parents attended the church and he grew up living near the church, Brewer said.

Since he’d lived in Norwood his entire life, Skidmore was an expert on local history.

“He was a historian,” Brewer said. “He could tell you all about Norwood. I would talk to him about different things — what buildings were when he was growing up and things like that.”

Skidmore served the church in many ways but never sought praise.

“He had one gear and that was fast,” Brewer said. “He always seemed to be in a hurry. He was one that he did things he didn’t want recognition for. He might come and fix something he’d seen broken here at the church. He’d fix it and nobody would ever know when it was done or who did it.”

“Raymond had a dry sense of humor,” Brewer said. “You’d think he was mad, but he wasn’t. He was always on the go. He never slowed down. Even at 88 years old, he didn’t slow down.”

In addition to attending the same church and going to school with Skidmore’s daughters, Brewer and Skidmore were also neighbors and enjoyed visiting.

“He was Raymond,” Brewer said. “There’s nobody else like him. He was my backdoor neighbor, too, so during COVID I would go down and check on him and Ms. Joy (Maner Lee) and got a lot closer during this COVID time, just talking and making sure they didn’t need anything, and of course they would get out better than I did sometimes. Just a special person around here. He’ll be missed a lot.”

“He and I taught Sunday school in the same class,” McMahon said. “I can’t say enough about him… I thought the world of him. We were best friends.”

Skidmore served as a town commissioner for 35 years and as the mayor of Norwood from 1983-1985.

He was also on the ABC board for 17 years.

Dwight Smith, another former mayor, filled the role directly before and immediately after Skidmore’s term.

Smith never ran against Skidmore. He stepped down as mayor and ran again later.

Skidmore preferred to serve as a town commissioner rather than as the mayor, Smith said.

“His biggest interest was in water and sewer for the town,” Smith said.

“He was mayor when the present water plant was built,” Smith added. “We had an old one, and when I left they built a new one, and he was mayor during that period of time.

He was also very, very interested in parks and recreation and helping develop Darrell Almond Park.”

The Skidmore Building in the park, used for BSA and Girl Scout meetings, was named after Skidmore.

“He was kind of shy,” Smith said. “He’d never campaigned for it. It was just because the board had a lot of respect for him and because he’d been an Eagle Scout that they felt like he was the most deserving of it.”

Smith said Skidmore was “devoted” to serving the town.

“He was a true, honest person and always courteous and always thoughtful of other people, and he loved this town,” Smith said. “I’ve got nothing but praise for him and I will miss him.”

Darrell Almond, another former mayor, said Skidmore was the one who had nominated

Almond for mayor. They served together on the town board for over 20 years.

“Whatever we needed to make this town better, Raymond was for it and worked night and day to accomplish those things,” Almond said.

Skidmore attended hundreds, potentially thousands of meetings in his service to the town, including both local meetings and others in Raleigh and Greensboro.

Almond first met Skidmore when Almond was a Boy Scout and Skidmore was his Scout Master. They later served together in the town government and Skidmore went to work for Almond’s company, Stanly Fixtures.

“I lost a good friend,” Almond said. “He was my dear friend, from Scouts to now. He’s been involved in my life, and I in his.”

Skidmore worked as a distribution manager for Young Manufacturing, but later retired from Stanly Fixtures.

Almond owned Stanly Fixtures with his brother before selling it about nine years ago. Skidmore retired in his 70s after working there for about 25 years.

“We tried to talk him out of quitting because [he was] still one of most productive guys we ever had,” Almond said.

Ronny Aldridge, an estimator and project manager for Stanly Fixtures, said Skidmore was an excellent cabinetmaker, making cabinets for retail locations such as Macy’s and Belk.

“Raymond was a super nice guy,” Aldridge said. “He was a very hard worker. I can’t say enough good things about him.”

“Raymond was active in a lot of things, and everything he did, he did it correctly,” he said. “He always made sure everything was done right.”

Skidmore was active in other areas of the county, as well.

“Raymond was full of energy and very helpful to anyone, friend or stranger,” Young said. “There’s no one around like him that I knew with so much energy.”

Both Skidmore and Young were involved with the town museum, with Skidmore serving as the town council’s representative for the museum.

Skidmore donated model vintage airplanes made from paper and balsa wood, according to Young. Those planes still hang in the museum.

“He made those when he was a child, and they were flying all over his house when I’d go over to play,” Young said. “He and his brother would have model airplanes hanging everywhere.”

McMahon said Skidmore was critical in assisting with the start of the museum after McMahon first decided to start a museum in 2000. McMahon and his wife began collecting memorabilia and photos.

“Raymond was on the board of commissioners along with me,” McMahon said. “He helped me talk to the board about having a surplus sale.”

Skidmore helped start and played on the adult softball league. Young compared his friend to the Energizer Bunny as he was active in sports and so many other projects.

“Raymond was full of energy and very helpful to anyone, friend or stranger,” Young said. “There’s no one around like him that I knew with so much energy.”

Center Rural Volunteer Fire and Rescue Department, which contracts with the town of Norwood, had an American flag lifted on its ladder truck at the memorial service for Skidmore’s funeral procession on Oct. 30, according to McMahon. The flag at the town hall was also lowered to half-mast.

“He was a community man,” McMahon said. “He believed in the town of Norwood.”

Some said that in addition to losing a personal friend, the community as a whole suffered a loss.

“I cannot say enough about him or his family,” McMahon said. “He was great. He was one of a kind, as far as I was concerned.”

Imari Scarbrough is a freelance journalist.