The old Albemarle Hotel is getting a second life and the building will soon feature 29 upscale apartments. Photo courtesy of Michael Lanier.

Progress is being made on the renovation of the Albemarle Hotel, the nearly 100-year-old building that will soon feature 29 rental apartments, ranging from 500 to 1,400 square feet.

Developer Jordan Jones and his Durham-based company Anchor & Pillar are working to convert the building into The Residences at the Albemarle Hotel.

The renovation of the Albemarle Hotel is estimated to cost more than $8 million through a combination of private investments and historic tax credit investors. Thanks to a crowdfunding campaign conducted this past spring, $1.8 million was raised in less than a month through 76 investors within the community.

“These are investors in the community that I am committing to and they are expecting to receive financial returns for their investment within the renovation of the Albemarle Hotel,” Jones said.

“I credit the success of this crowdfunding campaign to my partnership with the Uwharrie Bank team,” Jordan added. “Uwharrie continues to be an incredible champion of downtown Albemarle, Albemarle and Stanly County. I don’t expect this campaign would have been as successful without Uwharrie Bank’s support.” 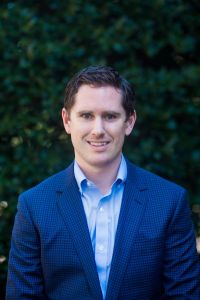 Jordan Jones is working to renovate the old Albemarle Hotel and turn it into upscale apartments. Photo courtesy of Jordan Jones.

The upscale apartments will feature a variety of design elements including historically restored windows, granite countertops and kitchen backsplashes, according to its website. There will also be many conveniences such as a fitness center, keyless entry, high-speed internet and a package management system.

Jones said a restaurant will hopefully occupy the more than 4,000-square-foot space where the grand lobby and dining room used to be.

Stokes Construction is renovating the building and they have hired several local subcontractors in the community, Jones said, noting it’s important to him that the construction jobs stayed within Stanly County.

“We’re really able to have a pretty significant local economic development impact on the community through this renovation process,” he said.

Phase one of the renovation, which was interior demolition, began in April. All non-structural and non-historic components in the building were removed including flooring, ceiling, electrical systems, interior walls and bathtubs. A good deal of asbestos was also abated during this period. 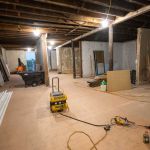 Work being done to renovate the Albemarle Hotel. Photo courtesy of Michael Lanier. 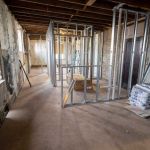 Work being done to renovate the Albemarle Hotel. Photo courtesy of Michael Lanier.

Stokes is currently building the new apartments, Jones said, which includes introducing new components such as an elevator shaft, floors, walls, ceilings, HVAC units, bathroom appliances and kitchen cabinets and sinks. A new roof was recently completed on part of the building while the building’s windows, which were removed last year by Double Hung, LLC of Greensboro, which specializes in window restoration, were near completion, Jones said.

“Everything in the building that people will see, touch and feel will be brand new,” Jones said, adding that a variety of individuals, from plumbers to electricians, are currently working on the building.

The timeline is to have the apartments fully renovated by next summer, during which time tenants can start to move in. Jones plans to start pre-leasing in early 2022. He said he’s already received more than 85 emails from interested applicants, ranging from Pfeiffer University students to single parents to retirees and empty nesters.

Even though the Residences will be a short distance from Pfeiffer’s new Center for Health Sciences facility, Jones said the apartments were designed and marketed for anyone that would be interested, not just for college students.

“We’re seeing a significant amount of interest from the community from all different types of demographics,” he said. “It’s a real broad diverse group of potential residents for the property.”

‘Lots of stories to tell’

Though he grew up in Fayetteville, Jones, 36, has a special connection to Stanly, as his mother’s family is from Badin. He has fond memories of visiting downtown Albemarle as a kid, where the old hotel always stood out to him.

“It’s always a community I’ve had an interest in working in,” Jones said. “Albemarle has been on my radar and is a place I’m very exciting about investing in.”

Giving new life to historic buildings has been a trend that’s been occurring all across the state in recent years. In Concord, for example, two formerly vacant downtown buildings have recently been turned into apartment complexes. Jones has had similar projects in Elizabeth City, New Orleans and Winnsboro, South Carolina.

First built in 1923, the Albemarle Hotel boasted 60 rooms. The first floor featured a ballroom, a dining room and a spacious lobby. During the hotel’s heyday, it was one of the key social gathering places for people in the community, though it had been vacant for the past few decades.

“That used to be the place where people had their Sunday lunch,” Albemarle Mayor Ronnie Michael said. “That was the place to go after church for lunch many years ago.”

Michael is optimistic that the new development can help revive not just the property, but the downtown as well.

“I look for it to be a very desirable place to live and even though we’re going to probably see a lot of Pfeiffer students I think you’ll see a lot of other people in the community that might want to go there to live,” Michael said.

Jones said he’s met many residents who have shared personal stories about what the building has meant to them, which he appreciates.

“These old hotels always have lots of stories to tell,” he added.