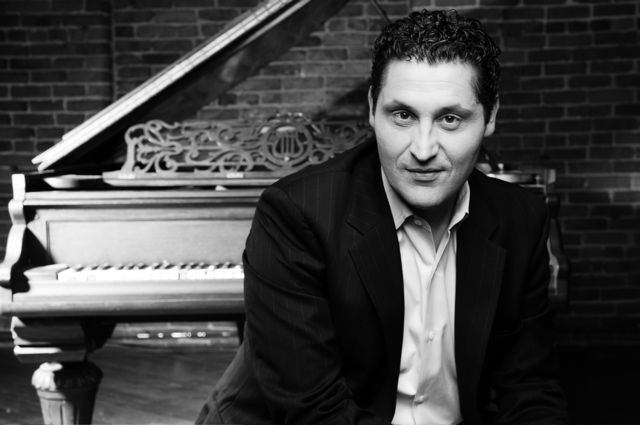 Paul Saik is coming to Stanly County for the first time this Saturday to perform a variety of musical pieces. Photo courtesy of Paul Saik.

Following beach music by the Embers and classic country by The Malpass Brothers, the Stanly County Concert Association is heading in a different direction with its third concert of the season, which will take place at 7:30 p.m. Saturday at the Agri-Civic Center.

Singer and pianist Paul Saik, who is music director at Centenary Methodist Church in New Bern, will perform a variety of musical pieces and styles that have helped influence his career as a performer.

“My concerts are usually … an adventure of my life through music,” he said, noting the audience can expect to hear church music and Broadway songs, to hits from crooners like Frank Sinatra and others.

“They’ll hear everything from ‘Embraceable You’ to ‘His Eye Is on the Sparrow’ to Josh Groban’s ‘You Raise Me Up,’ ” he said, noting people have referred to him as a “Elton John/Josh Groban type who does Christian music, too.”

He plans to perform hits from classic Broadway shows such as “Les Miserables” and “Phantom of the Opera” and songs from popular films such as “Over the Rainbow” and “Moon River.”

“It’s kind of a timeline, through music but as well as story, of my life,” he said.

A native of Jackson, Mississippi, Saik began playing the piano at 3, and at 13 had the position of pianist at First Baptist Church in Pearl, Mississippi. After graduating with a degree in piano performance from Mississippi College and master’s degrees in church music and organ performance from Baylor University, Saik performed on Broadway in New York and with opera companies throughout the country and around the world before taking the position in New Bern about a decade ago once his daughter was born.

Though he has performed in the Charlotte area, this will be his first time coming to Stanly County.

“He’s very much in demand and very sought after,” said Charlotte Maness, president of the association, who met him on cruise a few years ago. He was slated to perform last year before the pandemic hit.

Maness added that one of SCCA’s top goals is to always provide audiences with a diverse array of musical talents.

“We try to bring a good variety of music so that people will have some choices.”

As he shares stories about how music and various performers have impacted him, Saik hopes people will come away with not just an appreciation for the pieces, but with a better understanding of who he is as well.

“When many people finish my concert, they say, ‘Not only did I enjoy your music and enjoy the pieces you pick, but I felt I got to know you through the concert,'” he said.

He hopes people find comfort, hope and strength through the music that he plans to shares this weekend.

“During this time in this world, it is very difficult for some and so my hope is that this concert will be an inspirational time for them,” Saik said.

Tickets, which cost $20 for adults and $10 for students, can be purchased on SCCA’s website and are available in advance at the Agri-Civic Center or Starnes Jewelers.

As with the previous performances, while masks are not required, they are strongly encouraged.