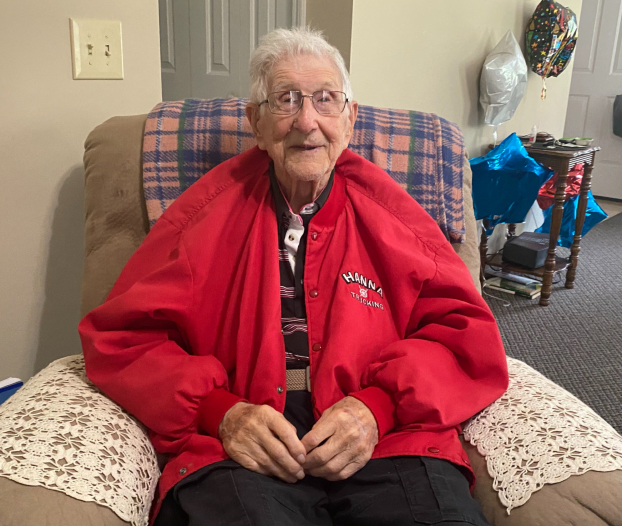 After turning 95 last month, John Mehalechko is in very select company: He is one of the last living World War II Veterans in Stanly County. L.C. Miller, another WWII veteran who is 94, is also part of the elite group.

In appreciation for their service, they will be the grand marshals for the Veterans Day Parade at 11 a.m. Thursday in Oakboro. As far as he knows, this will be the first time there will be multiple grand marshals leading the parade, Stanly County Veteran Services Officer Bo Almond said.

“It’s come to the point where we have so few World War II veterans, that we want to try and do whatever we can to get recognition for them because next year there might not be any,” Almond said.

Of the roughly 16 million Americans who served in World War II, only about 240,000 are still alive, according to information from the WWII Museum in New Orleans. There are about 6,600 veterans still living in North Carolina.

Almond told the paper there are around 3,000 active and former veterans in Stanly County.

Mehalechko, who played a role in the seven cannon salute during the Charters of Freedom dedication ceremony in downtown Albemarle last month, was told about the possibility of serving as a grand marshal a few months ago during a veterans affairs meeting at the senior center.

“I’m really honored to be selected,” he said during a recent interview, noting he’s looking forward to being around other veterans.

Miller initially declined the invitation to serve as a grand marshal when Almond first approached him due to the cold weather, but after giving it more thought, he agreed.

Miller said it was an “honor” to be chosen as one of the grand marshals leading the parade.

Mehalechko grew up in Centralia, Pennslvyania, one of eight children born to parents who immigrated to the country from Ukraine. Since he and his siblings could not speak Ukrainian and his parents did not speak English, the family learned to communicate through sign language.

“I had to try and relate to them any way I could,” he said.

Growing up with such a difficult last name, most people throughout his life have simply referred to him as “Mr. John.”

“I always teased everybody and I said, ‘Well my last name is a good southern name,’ ” he joked.

After high school in 1945, Mehalechko, 17, enlisted in the U.S. Navy and traveled to the North Pacific, where he was stationed for about 15 months on the USS Shelby,a 473-foot-long Windsor-class attack transport. His mission was to help transport thousands of military troops, nurses and other personnel during various runs from Pearl Harbor, San Francisco and other locations to Japanese islands in the Pacific including Eniwetok, Ulithi and, likely the most famous, Okinawa. The ship also transported wounded servicemen from Okinawa to Saipan.

While navigating the Pacific, Shelby was under constant threat of attack from below, in the form of enemy submarine torpedoes, and above, with Japanese Kamikaze aircraft. At one point, Mehalechko remembers a plane passed over Shelby and crashed into the light cruiser USS Birmingham anchored nearby, killing and wounding more than 100 soldiers. To evade the near-constant dangers, he said Shelby, which was always accompanied by destroyers, traveled in a zigzag fashion to avoid getting hit by torpedoes and it also erected floating smoke pots to screen the ship from enemy observation posts and artillery fire.

“We had to make smoke in order to cover our ship because if they hit our ship,” Mehalechko said about the Japanese planes, “quite a few people would have been killed.”

Once Shelby got close enough to her destination, the ship would anchor and Mehalechko and other officers would deploy legions of smaller boats called LCVPs to transport the troops to the beaches as they prepared for combat. None of the naval officers were directly involved in combat operations, though Mehalechko said he was properly trained to identify booby traps and fire weapons should such a situation arise.

“If the boat that we had was shot from under us, we had to go on land and fight with the troops,” he said.

At only 17, Mehalechko said the situation he was involved with in transporting thousands of troops onto the frontlines of some of the key battles during the latter portion of the war looked to him like a big show.

“We didn’t realize the danger,” he said, noting that even indirectly being involved in battle is unlike anything else he had ever experienced.

“I was pretty proud I was part of that, we all were,” he said about his service, though he mentioned most people didn’t necessarily talk about their experiences.

After the war ended, Mehalechko attended a technical college in Fort Wayne, Indiana, where he received a degree in civil engineering. He worked for about 25 years for the State of Indiana Department of Highways. About a decade ago, Mehalechko and his wife Bonnie moved to Stanly County to be closer to their daughter Sonja and her family, who live in Mount Gilead.

Bonnie passed away in 2018. Mehalechko now lives in an apartment in Albemarle, receiving daily assistance thanks to several caretakers. In addition to his daughter, he has a son John, five grandchildren and nine great-grandchildren.

At 95, Mehalechko is still quite active. He enjoys daily walks around the Stanly County Commons and chatting with officials with the Board of Elections, eating at Handi-Mart and watching sports, including the Carolina Panthers, and classic western shows like “Gunsmoke,” “The Virginian” and “The Rifleman.”

He said the best part of living in Stanly County has been getting to know the people.

“It’s the most friendly place I’ve ever lived in,” he said.

Testing parachutes and looking up at the sky

Unlike Mehalechko, L.C. Miller is a Stanly native. He decided to drop out of Albemarle Senior High School at the age of 17 in 1944 to enlist in the U.S. Navy. Many of his friends, who were older, had already joined the military and he didn’t want to be left out.

He was stationed for about two years on the USS Alfred A. Cunningham, a destroyer that traveled throughout the Atlantic and Pacific performing roles such as escort services and engaging in combat with enemies such as the Kamikaze aircraft.

Miller recalls that when they were in the Philippines, they were attacked by Kamikazes. One aircraft landed on the tail end of the ship, but fortunately no damage was done to the ship and no troops were injured or killed.

One of the warship’s main goals was protecting other smaller ships, like Mehalechko’s, that were transporting troops to places like Okinawa.

“We protected the other ships, or helped to protect them,” Miller said.

Troops onboard Cunningham often were engaged in firefights with enemy aircraft, which would often attack in the dozens, and Miller regularly manned the Bofors 40 mm gun. He shot down lots of planes during his naval career, but couldn’t recall any specific estimates. 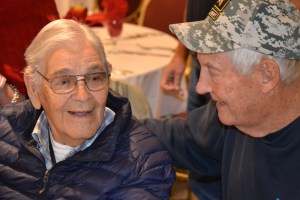 L.C. Miller enjoys a conversation with Harold “Wayne” Huneycutt during the Veterans Day Luncheon at Atrium Health Stanly in 2019.

After two years with the Navy, Miller came back to Stanly before enlisting again and joining the U.S. Army, specifically the 82nd Airborne Division.

“You made five jumps and then you became a paratrooper,” he said of the requirements.

Once he completed his training, he went to Fort Bragg, where he eventually became part of the Parachute Test Platoon, specializing in parachute assault operations. He spent about 18 years testing a variety of parachute equipment and estimates he took part in around 100 jumps.

“The first couple, you were jittery and thinking about a whole lot of stuff but after that, it became routine,” he said about his many jumps.

During his time at Fort Bragg, Miller volunteered to travel to Nevada in 1955 to test the blast from nuclear explosions at the Nevada Test Site, about 65 miles from Las Vegas. This was part of Operation Teapot, which was a series of 14 nuclear test explosions.

Miller recalls he was one of about 1,000 troops placed in a six-foot trench, which was only a few thousands yards from the detonation site. They were tightly packed together inside the trench and were told to cover their eyes and not look up when the blast occurred. Miller though decided to have a look at the explosion that took place in the sky.

“It lit the world up,” he said of the explosion. “It wasn’t too much of a sound, but it was just a light, like somebody put a flashlight in your eyes. It was just a big flash.”

When the flash came, Miller remembered seeing the bones in his arms.

“I wasn’t brave I was just cocky,” Miller said about looking up at the blast.

An assortment of buildings, including residential homes, were constructed at the site, Miller said, to test various building construction types in a nuclear blast. The buildings were populated with mannequins, and stocked with different types of canned and packaged foods.

Once the explosion subsided, the troops left the trench and began walking towards ground zero of the blast. Each individual wore a type of badge, which detected radiation levels in the area. They walked about 2,500 yards before stopping about 150 feet from the actual detonation site.

Even though he was surrounded by high levels of radiation, Miller said it’s never caused any health complications.

Miller retired from the military in 1966. After attending barber school in Winston-Salem, he spent about 20 years as a barber in Stanly County.

He is married to JoAnne and has three children, including two stepsons, five grandchildren and four great-grandchildren.