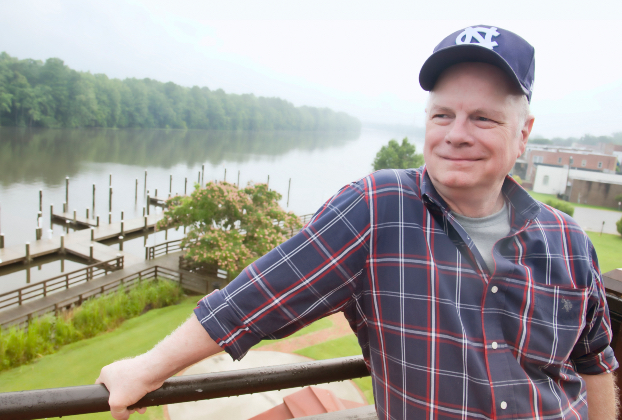 Willie Drye lives in Wilmington, but he spent 20 years in Plymouth and still owns a cottage in the town. Photo courtesy of Doward Jones.

A Stanly County native was honored recently for his volunteer work with the Roanoke River Lighthouse and Maritime Museum in Plymouth.

Journalist and award-winning author Willie Drye, who grew up in Richfield, received the 2021 Roanoke River Lighthouse Award from the Outer Banks Lighthouse Society. 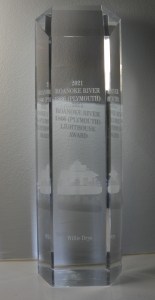 Though he and his wife Jane live in Wilmington, they spent 20 years in Plymouth and still own a small coastal cottage. From the moment he first arrived in the small town, he enjoyed learning about its rich history.

“I’m a history nut and there is just so much history all over the place down there that there were plenty of things for me to get involved in,” he said.

Drye had been a volunteer for many years with the maritime museum, located across the street from the lighthouse, before taking over as president of the board of directors for the nonprofit Washington County Waterways Commission last summer, following the death of its previous leader.

The commission oversees the lighthouse and museum as part of its mission to collect and preserve the maritime history of Washington County and eastern North Carolina. 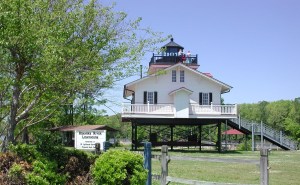 The Roanoke River Lighthouse is located in Plymouth. Photo courtesy of Willie Drye.

Drye was working to revitalize both the lighthouse and the museum, which had been struggling, when the COVID-19 pandemic hit and both were closed indefinitely to the public. They were reopened in June for the annual Black Bear Festival, which drew hundreds of people to the town. The commission has since hired a curator for the museum, which is now open five days a week.

“Willie is a historian, and a storyteller and an author and this (the lighthouse) was important to the community and so he got things rolling again and that’s why we gave him the award,” said Bett Padgett, president of the Outer Banks Lighthouse Society.