On Nov. 6, detectives with the Stanly County Sheriff’s Office were called to a local address in reference to a sexual assault.

During the investigation detectives determined that Aaron Cartea Patterson, 65, of Rich Hatchet Road, Huntersville, was the accused offender. 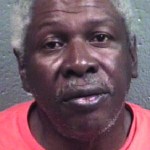 Detectives arrested Patterson later that evening in Huntersville and transported him to the Stanly County Jail, where he received an initial court appearance of Nov. 29.

He is charged with first-degree forcible rape, assault with a deadly weapon with intent to kill and assault by strangulation.