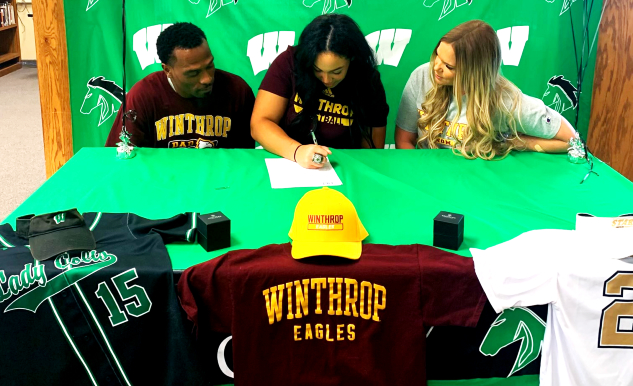 As a freshman, she was a member of the 2019 2A state championship team, which went 28-2 en route to the title.

After winning another state title this past season, the senior decided on her future college plans, choosing to sign with the Winthrop Eagles.

Little played in 15 games for the Colts last season, hitting .345 with seven RBIs as West went 20-0 to win the 2A championship. In three seasons with West, including the COVID-shortened 2020, the Colts were 51-2 overall and had three other players sign with Div. 1 programs.

The senior said she chose Winthrop because she really liked the players and the school, saying Winthrop was “a better fit for me than the others I’ve looked at.”

“I like the coaching staff,” Little said. “They were hard on me, but not unfairly hard on me.”

Winthrop also fit into her academic plans, she said. Little plans to major in biology and wants to become a plastic surgeon, specializing in facial reconstruction.

The school is also an hour away from her family, she said, which was important in her decision. With Rock Hill being a smaller town than Charlotte, Little said she gets more of the small town feel there while also being close to the big city.

Having started her softball career at 4, Little said she had played on the softball fields at the school before but never visited the campus until her recruiting time.

Little said her mother, Jill Dry, has been the most influential person in her life on the softball side, getting her involved in the sport early.

The West senior said she started playing travel softball at 12 and went on to showcase ball with the Williamsburg Stars 18U Gold Strahan.

Showcase ball, she said, was more about individual skill, while school ball with West was a team working towards a common goal. Recruiters had less time during her career to be out at games recruiting because of the pandemic, so showcase ball was important, she said.

However, Little said playing for the Colts was impactful on her career, especially as a freshman.

“It’s like having 15 older sisters that want you to get better. (They) have all experienced more than you, so they can help you. It was a good learning and growing process,” Little said.

Looking forward to her senior season, Little said the team and new head coach Emily Smith, who was coach Craig Carter’s assistant for the two state title teams, will take the year one step at a time.

“Hopefully, we will win the conference, then go on to regionals and hopefully win another ring.”

Regarding Little, Smith said she was excited for the senior to take the next step in her career.

“Kaylyn is not only a great softball player, but a great person. She is a wonderful teammate and brings energy to our team. She will be a great addition at Winthrop,” Smith said. “We are looking forward to a great senior season for her.”

Running events set to help people get moving during…