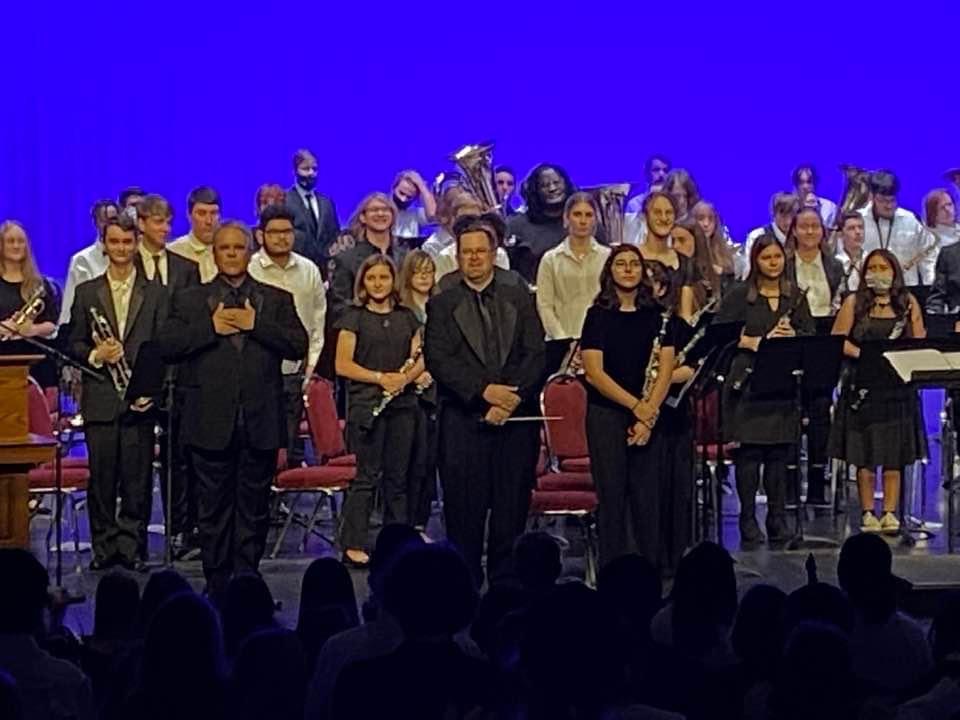 Around 160 students from across Stanly County and surrounding districts auditioned and were selected to take part in the event, which was the brainchild of Dr. Joseph Earp, Pfeiffer’s director of instrumental music.

Having organized similar events during his tenure as director of athletic bands at Limestone College in Gaffney, South Carolina, and helping with all-county concerts during his time as band director at Cox Mill High School in Cabarrus County, Earp, who has been with Pfeiffer since August, had experience working with large groups of high school students.

“I’ve just got the process down,” he said.

Twenty-five high schools across North Carolina and part of South Carolina were represented, Earp said. He initially hoped to have one band featuring about 80 students but was pleasantly surprised when the number doubled. There was  enough students to form two bands.

Earp conducted the music for the concert, which was free to the public, along with Robert Smith, who has composed more than 600 pieces and has performed throughout the world.

To spread the word about the Honor Band, Earp visited local schools, promoted the event on social media and sent emails to high school band directors.

Students were nominated by their band directors and had to submit audition videos to be included in each of the musical sections, which included trumpet, flute and saxophone.

The students came together for the first time Wednesday night to rehearse at the Stanly County Agri-Civic Center. An all-day rehearsal Thursday led to the 7:30 p.m. concert.

Around 700 people were in attendance for the concert, according to Earp.

“All of the students were really proud of the work they accomplished,” he said.

With such success in its first go-around, Earp plans to make the Pfeiffer Invitational Honor Band an annual event.