‘I selected this city and this city also selected me’: Jason Bollhorst on how he became Albemarle’s police chief 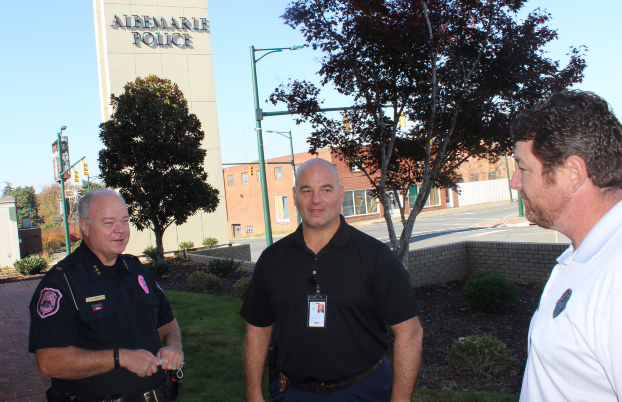 After spending 26 years with the Newport News Police Department in Virginia, where he served in numerous positions, Jason Bollhorst was looking to leverage his experience into obtaining a leadership role, within a department, preferably as police chief.

Though he had spent his whole life in Virginia, Bollhorst, 53, expanded his search beyond the state and found job openings all across the country, from Washington to Florida.

Inspired to become a police officer

When Bollhorst, who grew up in Newport News, first attended school at nearby Thomas Nelson Community College, he planned to pursue a career in engineering. But as he began taking the necessary classes, he realized the subject was not a good fit for his outgoing personality.

“I wanted to be outdoors and do more active stuff,” he said.

As he was trying to figure out what he wanted to do with his life, he happened upon an open door with an instructor teaching a criminal justice class, which quickly piqued his interest.

“Just listening to the dynamics of the conversation of the class I was like, well maybe I’ll sign up for that and just see how it goes,” he recalled.

He enjoyed learning about the specifics of the criminal justice system, but what really solidified within Bollhorst that he wanted to pursue a career as a law enforcement officer was his connection with one of his instructors, a retired Virginia State Trooper named William Duff.

“He was instrumental,” Bollhorst said about Duff’s impact on his life, noting that he shaped his perception of what a law enforcement officer should strive to be. “Everything, the intensity, the seriousness, how critical it is to have good police officers with integrity and strong ethics and morals….it just really stood out and it was like, ‘Man, it really means something to be a police officer.'”

Throughout his career with Newport News Police, Bollhorst continued to stay in touch with Duff, until he passed away several years ago. Had it not been for Duff, Bollhorst said he would likely not have become a police officer.

After graduating with an associate’s degree in police science from Thomas Nelson Community College and a bachelor’s in science degree in governmental administration from Christopher Newport University, Bollhorst applied to departments throughout the Hampton Roads region, including the state police, but did not hear back. He said this was not surprising, as it was difficult in the early 1990s to secure a job as a police officer, which was a highly desired profession.

“If a police department had five openings, you had 800-plus people applying,” he said.

After working several odd jobs for a few years, including as an aide in a special education class and a wrestling coach, he became an officer with Newport News in 1995. His dream had finally become a reality.

“When you have an ambition to do something, you stay after it and it finally happens for you,” he said. “I was just ecstatic, the thrill of getting into the profession that I had so desired to get. I felt driven towards that career field.”

Throughout his career, he had a variety of assignments including supervisory positions in Patrol Operations, Tactical Operations (SWAT) and Investigations along with narcotics, gangs and criminal enterprises associated with federal task force operations. During his last several years with the department, he served as captain of a precinct, where he was in charge of more than 100 officers.

As he was approaching 50 a few years go, which is the age many officers often retire, Bollhorst took time to evaluate where he was in life and decided to look for a position as chief. It was something he had been contemplating for quite some time.

“I was yearning for something. What’s next?” he said, noting if he stayed at Newport News, he would likely only be able to rise as high as assistant police chief. “I just decided, I’ve got to expand my opportunities….I felt ready to go ahead and take on my own agency and to share some of the skills, leadership and the personal and professional development that I’ve received.”

Receiving the blessing from his wife Sherrie, be began searching for positions across the country. While he kept an open mind, as someone who has a love of hunting and fishing, Bollhorst was looking for an opportunity in a city that aligned with those desires.

His wife was the one who discovered the job posting about Albemarle looking for a new police chief. Not familiar with the city, Bollhorst and his wife initially thought it was a department located along the Outer Banks, near the Albemarle Sound.

Once he researched the area, Bollhorst was impressed with its many natural resources, including Morrow Mountain, Badin Lake, Lake Tillery and the Uwharrie National Forest, along with its close proximity to Charlotte.

“I did some more digging and looked at it and I said, ‘Hey, that’s something I can do’ and so I applied,” he said.

The reality that he could become chief never set in for Bollhorst until he was selected as one of the finalists for the coveted position.

Once he received the news that he had been chosen, the turnaround was pretty quick. His last day with Newport News was Oct. 1 and Oct. 4 was his first day as Albemarle’s new police chief. He was formally introduced to members of the city council during a meeting that night.

“We had very, very strong candidates and a lot of candidates with good experience,” City Manager Michael Ferris said, noting that as the evaluation process continued, it became more evident Bollhorst was the right person for the job.

“It became clear that Chief Bollhorst has the right level of experience, but also a personality and personal skills and a desire to be here and to serve this community,” Ferris said, adding that Bollhorst’s excitement for wanting to serve the community helped separate him from the other candidates.

“I selected this city and this city also selected me,” Bollhorst told Council. “Everything came together to bring me here to this city.”

Plans for the future

His position at his new job differs quite a bit compared to his old one, especially when it comes to sheer size. While at Newport News, he was one of roughly 460 sworn officers and helped oversee more than 100 officers as captain of one of the department’s three precincts. Albemarle, by comparison, is much smaller. There are about 38 sworn officers, though the ranks should soon swell to around 52 when academy students join the force after completing BLET training.

Over the past few weeks, Bollhorst has spent much of his time getting to know his fellow officers, other city employees and police chiefs across the county.

“It feels like I can be more impactful on others,” he said. “Looking back to William Duff and what he gave to me, I try and carry that forward.” 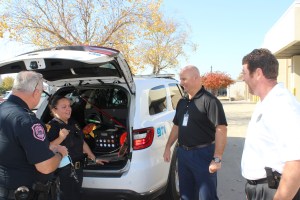 While he has his own ideas and personal experiences regarding how to operate a department, he understands there needs to be a balance between implementing necessary changes and keeping with the status quo of how things have gone in the past.

“I’m not here trying to rebuild or reconstruct, it’s just really unleashing the potential of the employees that are currently here,” he said.

And as much the change in jobs has been refreshing for Bollhorst, it’s also been a nice restart for many of the employees, who have enjoyed getting to know their new boss.

As someone with a background in narcotics, Bollhorst is aware of Albemarle’s struggles in combating the ongoing opioid epidemic and he plans to work with community partners to address the problem.

He also wants to make sure his officers are properly staffed and trained to meet the needs of a city which continues to grow, including making sure residents feel safe and secure.

“You’ve got to have a good handle on crime,” he said. “It’s the police department’s responsibility to ensure crime and the fear of crime is at a level that influences people to want to come live here and business to come here and provide opportunities.”

Going forward, Bollhorst also wants the department to continue fostering meaningful relationships with the community, especially young people. He would like to develop programs where officers can interact with and mentor students, including helping them with homework and coaching them in athletics.

Another idea he brought up was creating a K-9 program, similar to the ones already established in Locust, Oakboro and Stanfield. His former department had a strong program and it was always a great way to connect with the community.