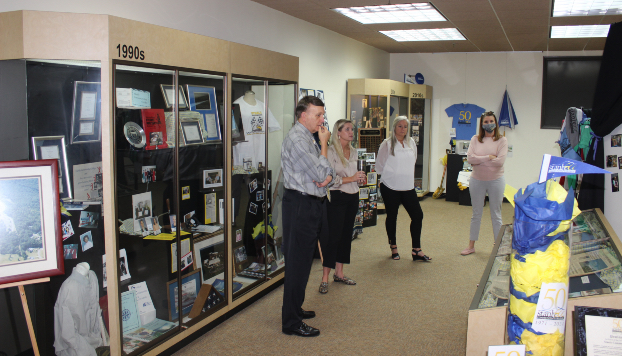 In celebration of Stanly Community College’s year-long 50th anniversary, an exhibit featuring memorabilia from the college throughout the decades is set up at the Stanly County History Center and available to the public until March.

The exhibit, “SCC Through The Decades,” features photographs, newspaper articles and colorful artifacts detailing the history of the college and highlighting the many people who played key roles in its creation and longevity over the decades.

“We love partnering with the community and so we thought, ‘Well how cool would it be if we could set up all the things that Dan Hazlett (part-time instructor who’s been with the college since it’s founding) has saved over the last 50 years and let the community be able to come in and see it,’ ” said Jeania Martin, executive director of the SCC Foundation and a member of the anniversary committee.

Martin and Hazlett, along with two other committee members, Jessica Smith and Mark Sample, began collecting photos, newspaper articles and other memorabilia from the college and members of the community until they had enough content. It took them about a week to erect most of the exhibit, which takes up three of the glass display cases. 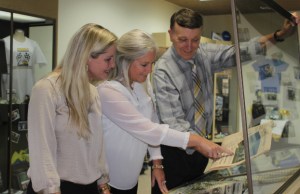 The college’s 50th anniversary committee members Jeania Martin, Jessica Smith and Dan Hazlett, along with Mark Sample, set up most of the exhibit in about a week.

“It was unbelievable to us just to see everything and the impact that the college has made on this county,” Martin said, noting she learned many new things about the college while setting up the exhibit. “We’ve learned so much about the college and how so many people in the community are connected to the college.” 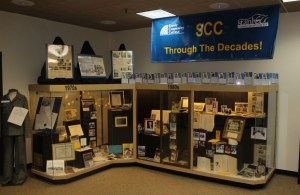 The exhibit contains tons of pictures, newspaper articles and other memorabilia from the college’s early years in the 1970s and 1980s.

Even though the exhibit does highlight current and former instructors and the five college presidents, the focus has been to make it more about the students. Committee members are still setting up 50 “success stories” featuring prominent alumni, such as Albemarle Mayor Pro-Tem Martha Sue Hall and Stanly County Historical Society President Kent Harkey, that have gone on to play key roles in the community.

“We wanted to really emphasize the students and not employees,” Hazlett said. “Here are our graduates and this is what we’ve been about over the years.”

A few of the interesting highlights in the exhibit include: 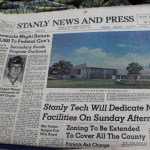 The first color photograph in the SNAP appeared in June 1977 and featured the Patterson Building. 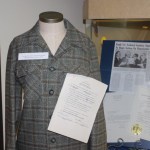 The exhibit is open to the public from 9 a.m. to 5 p.m. Monday through Friday.