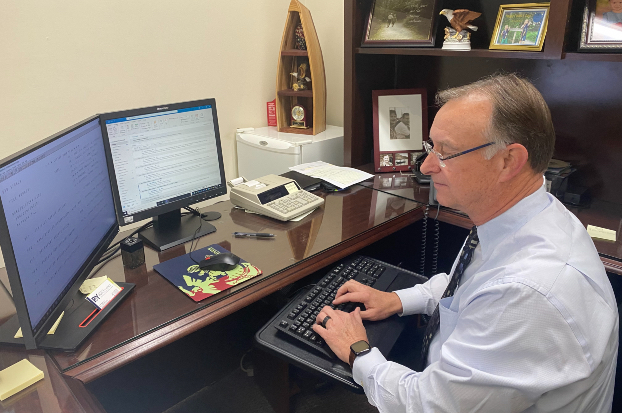 Michael Huneycutt will not run to seek a fifth term as Clerk of Superior Court.

After 15 years serving as Stanly County’s Clerk of Superior Court, Michael Huneycutt is not planning to run for re-election next year. His fourth term will run out at the end of November 2022.

He had been contemplating stepping down for the past two years, but called the decision a hard one to make. Huneycutt will be 69 next year and with another four years on the job, wouldn’t conclude a fifth term until he was into his early 70s.

“If I’m going to approach the people of Stanly County and ask them for a job, it’s a four-year job, and I need to be ready to work four years,” he said. “If I’m not going to work four years, the integrity side of it is you don’t ask for something you can’t fulfill.”

He noted the position of clerk of superior court belongs to the people, it does not belong to one individual.

“The people of Stanly County deserve the best representation they can have in any elected official,” he said.

As clerk of court, Huneycutt manages the operations of the courthouse, where he manages a staff of around 20. This includes overseeing jury selection, making sure each courtroom is staffed and performing a variety of acts such as issuing summons and subpoenas and setting up the court file.

He even held a jury trial during his tenure, when he served as a judge during an incompetency trial.

As someone who had previously spent about 30 years as a teacher and more than a decade as treasurer of the Stanly County Republican Party, Huneycutt ran for county clerk in 2006 following the retirement of David Fisher. He got elected in November 2006.

“I saw the clerk’s job as just a way to continue helping people,” he said, noting he unsuccessfully sought the position four years earlier.

Looking back on his career as the clerk of the court, he said it’s been “my privilege and honor to help people navigate some of the waters” of the judicial system. What he will miss most about his job, he said, will be the people, including his staff that’s he’s worked with over the years.

Due to his 45 years working for the state, Huneycutt earlier this year received the Richard Caswell Award for his service.

Unlike his past three general elections, where he ran unopposed, there have already been several individuals who are planning on running to replace Huneycutt.

“It will be a free-for-all,” he said, noting that he’s heard from four people who have approached him about their interest in running for his position. “It will be competitive.”

Candidates must be affiliated with their political party for 90 days before filing and must establish a Candidate Committee within 10 days of filing.

No matter who wins next November, Huneycutt said the key to the job is being able to work and interact with a variety of people, both within the judicial system and the larger community.

“I think it’s important for the person who has this job to be accessible to the people,” he said.

As for his plans once he retires from elected office?

Huneycutt is excited about working on his family’s farm in Millingport, spending more time with his family and traveling.