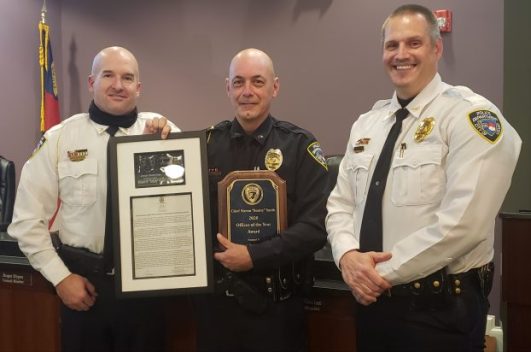 Police officers have extremely difficult jobs, as they regularly interact with dangerous individuals and often have to make potentially life or death decisions in the blink of an eye. At any moment, a traffic stop or conversation with an individual could potentially turn violent.

With all the many challenges they face, including over the past year with nationwide calls in some corners to “Defund the Police,” it could be easy for officers at times to see the worst in people and fall prey to cynicism.

But that is why officers like Cpl. Dwayne Dietz with the Locust Police Department are valuable. Whether organizing a campaign to purchase a new scooter for a teenager who had his stolen or helping a pregnant mother through childbirth, during his nine years in the service he has helped those in need. And even though he has dealt with his share of dangerous individuals, he still looks for the humanity in those around him.

“Corporal Dietz has never stopped putting on the Locust uniform and showing up to do his duty, always working hard with the unwavering desire to protect the city of Locust and serve its citizens,” Police Chief Jeff Shew said during a January council meeting, when he awarded Dietz with the inaugural Chief Steven “Smitty” Smith Officer of the Year award.

Dietz said it meant a lot receiving the award, as he called Smith, who died unexpectedly last year, his best friend during his time on the force.

In addition to all the responsibilities that come with being an officer, Dietz earlier this year gained a new four-legged partner as he became the handler to Rico, the department’s new K-9 officer. The dog, who joined the force in late October, helped with his first arrest when he played a key role in a drug bust a few weeks ago. 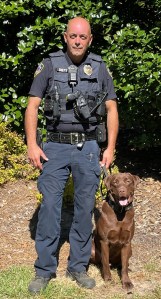 The SNAP recently caught up with Dietz, 52, to learn more about his life, how he became an officer and what the profession means to him.

Though he is likely one of the most recognized officers within the force — he has been named officer of the month numerous times and has appeared often before city council — it takes only a second in talking with Dietz to know he is not from Locust, nor the state for that matter.

Originally from Michigan, Dietz grew up working in construction and the prospect of becoming a police officer was never on his radar. He arrived in Stanfield in 2008 for his family to be closer to his wife’s sister, who lived in the area, though he jokes that he ended up in western Stanly County because it was “where we ran out of gas.”

With the construction industry struggling with the recession, he happened to see an advertisement encouraging folks to apply for basic law enforcement training at Stanly Community College and he thought he’d give it a shot.

While going through training, Dietz decided he wanted to work in Locust and made it known to his instructors. After graduating from the program in 2012, Dietz recalls developing his passion for the profession during ride-alongs with Oakboro Police Chief T.J. Smith, who at the time was an officer with Locust. “I rode with T.J. and I just fell in love with it (being a police officer) from then on.”

While he enjoys the adrenaline of car chases (and he’s been involved in many) and the unpredictability of the job, for Dietz the best and most rewarding part has been his ability to help others. And he’s done a lot of giving back during his time with Locust.

Several years ago, Dietz recalls getting dispatched to Food Lion to help a couple that were hitchhiking from Texas to Boston to be with a dying family member. They had not eaten in a few days, so Dietz bought them food, helped get them bus tickets to Boston and then drove them to the bus stop in Charlotte.

“I try to treat people how I would want my family to be treated,” he said.

Last December, after Dietz responded to a report of a stolen scooter from a Locust teenager named Jihad Hooker, he organized a community fundraising effort to purchase a new scooter for the teen, who had saved all his money to purchase the scooter, which was used to take him to and from work so he would not have to burden his parents.

“I was talking with him and he was just a polite and courteous young man,”  Dietz told the SNAP at the time. “Just the way he treated me and talked to me, I knew he was a good kid and excited about the moped.”

Just three days after he started the effort, Dietz was able to purchase a scooter fully gassed, along with a year’s coverage of insurance for the scooter and many items to protect the scooter. Dietz personally presented the scooter to Hooker and his family at City Hall a few days before Christmas.

He hopes positive experiences like the one he had with Hooker can help reinforce to young people that police officers, while human and imperfect, are around to serve and protect the community.

“As a police officer, you’re able to do good for people as opposed to always being looked at as bad,” Dietz said.

His selfless nature is valued and appreciated by those who work alongside him. “One of the things I always say about Dwayne is that as good as an officer that he is, he is equally just a really good person,” Shew said.

Most recently in August, Dietz was dispatched to a childbirth in progress at a home in Locust. He was first to respond as both fire and EMS personnel were still en route. Once he got there, he entered a chaotic scene as both the father and grandmother were panicked and uncertain on how to proceed.

After helping with the delivery and working to keep everyone calm, the situation appeared normal until the baby stopped breathing and began turning blue. Dietz called for emergency personnel to come quickly and instructed the woman’s mother to rub the baby’s back to help stimulate him.

Once West Stanly Fire and EMS arrived, they were able to revive the child and he was transported to a hospital for further care. The day after the couple left the hospital, Dietz visited with them to check on the baby.

Due to his actions, Dietz was awarded a commendation for meritorious conduct and was recognized during the November city council meeting. The couple — mother Brittnie Sullivan, father Brandon Hill, their daughter and baby son Ripley — were also in attendance to show appreciation for Dietz.

Dietz noted that throughout his time on the force, whenever situations are chaotic and dangerous, “I always seem to stay calm.”

Though not a native of Locust, he is respected and loved by many in the community, with Shew referring to him as the “most beloved Northerner in the city of Locust.”

Even with his many accolades during his tenure, Dietz remains grounded. He plans to stay with LPD for the remainder of his career.

“Overall, I love law enforcement,” he said. “I wouldn’t trade it for anything.”