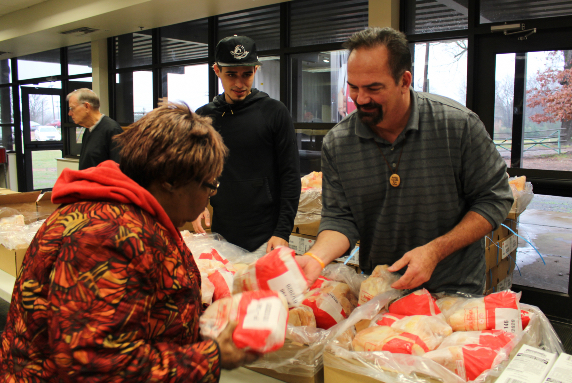 Over the past two years, it’s pretty likely that most people in Stanly County have heard of the nonprofit Nehemiah Project. The group has seemingly been everywhere in the county, providing key assistance to as many people as possible while also partnering with many nonprofits.

Named after the the historical figure from the Bible who was called by God to help rebuild the walls of Jerusalem after the Babylonian exile, the group was founded in 2019 by Paul Peters and focuses its efforts on addressing six key issues, or towers, within the county: the homeless, senior citizens, veterans, at-risk kids and abused women, those who suffer from addiction and/or mental health disorders, and those with intellectual and/or developmental disabilities.

Originally from Illinois, Peters, 57, always wanted to help people, especially children, in some capacity. After graduating from the University of Illinois with a bachelor’s degree in psychology, he worked as as a chaplain in New York, where he served and worked with many at-risk kids and young adults. He also served eight years in the U.S. Army Reserves and National Guard.

Peters moved to North Carolina in 1995 to attend Southern Evangelical Seminary in Matthews with the hopes of becoming a missionary. Though that didn’t pan out, he was able to open his own business in 2010, Covenant Case Management Services, which serves individuals with intellectual and developmental disabilities across much of the state.

Several years later, Peters traveled to Myrtle Beach, for one of his annual retreats, where he spends a few days alone in a hotel room praying and talking with God for discernment and guidance. This is where the idea for Nehemiah Project, and its six focus areas, was established.

“It really came out of me spending some time with the Lord,” he said.

He poured through the Book of Nehemiah, focusing on Nehemiah’s efforts to rebuild the walls of Jerusalem and heal the city. He wanted to create a similar impact in communities across North Carolina.

“I said where do you want us to start and God just said, ‘You’re starting in Stanly County,’ ” Peters recalled, noting a big factor was the county’s struggles combating the opioid epidemic. Though he was living in Charlotte, he used to work for Monarch in the early 2000s when it was still Arc Services and had an affinity for the area, especially The Goody Shop Cafe.

He knew Stanly would serve as a target-rich area to pilot his organization because it has always been a “relationship-oriented community.”

“Anytime you’re going to make an impact on somebody’s life it has to do with relationships,” Peters said. “And once they understand you’re here to serve them and help them, they’re more trusting, they’re more open.” 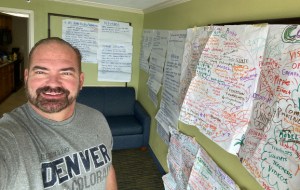 Paul Peters during one of his beach retreats where he plans for the future. Photo courtesy of Paul Peters.

Peters established Nehemiah Project Covenant of Love in Stanly County in 2019 with each of the six towers representing issues Peters had encountered throughout his life: He struggled in the past with addiction to alcohol; he’s been homeless; his mother was abused by his father as he became an at-risk youth; he’s worked with seniors in nursing homes; he’s served in the military; and he has plenty of experience working with developmentally-challenged individuals.

“In my life God has carried me through difficult times,” Peters said. “In those difficult times my life has been touched, in some capacity, with each of the Nehemiah towers.”

Working with other local organizations

Since first establishing its present in Stanly, Nehemiah Project has partnered with more than 30 organizations across the county to provide services to people within the six towers. These include Esther House, Butterfly House, Stanly Community Christian Ministry, The Community Inn, Will’s Place, The Bridge to Recovery, American Legion Post 520, GHA Autism Supports and Stanly County Senior Services.

“Nehemiah is about collaborating and working together to serve the community, we’re not about competing” with other groups, said Peters, who now lives in the county. “We’re taking their dream and partnering with our dream….it’s all about working together because we all have an aspect of serving the community.”

“We’re wanting to be the mortar in the wall…we’re wanting to fill the gaps and bring all the nonprofits together,” said Jennifer McSwain, interim acting director with the organization, alluding to the overarching metaphor that has guided the nonprofit — the rebuilding of the walls of Jerusalem.

In order to make sure each area of focus gets the attention it deserves, there are go-to people for each of the six towers who help devise specific activities and make sure volunteers are in place.

While they have organized a few large-scale activities, including the “Work Hard Dream Big” events for young kids held at the E.E. Waddell Community Center and the monthly Changing Lives After 5 meetings, many of the organization’s initiatives have been small acts of kindness that don’t necessarily draw much publicity, such as cleaning apartments for seniors living in the Morrow Chase Apartments, distributing Christmas gifts to kids, building wheelchair ramps for handicapped individuals and mentoring elementary students as part of the Lunch Buddy program.

“Our approach has not been in your face, it’s been more behind-the-scenes,” similar to the way Jesus conducted himself, Peters said. “We don’t want to get the glory, we want God to get the glory.” 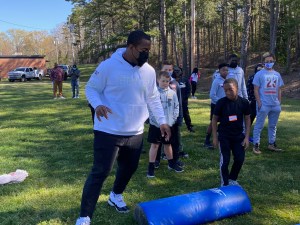 B.J. Hill talks to kids about a football drill during the “Work Hard Dream Big” event at the E.E. Waddell Community Center in April.

As if tending to its six towers of service was not enough, Nehemiah Project also founded the outdoor consignment store 4 Rivers in downtown Albemarle. Though the group is no longer directly running the shop, the proceeds still directly benefit its many community partners.

The organization also has a care closet at its headquarters, located at 2000 West Main Street in Albemarle, which provides free clothing, medical equipment and food to individuals in need.

“The community has been great about bringing items in,” said Brandi Jordan, a board member and one of Peters’ business partners.

By working with various organizations and individuals on key issues, Peters hopes the community will become more open and accepting to people struggling and going through difficult times.

All about passion and purpose

Over the past few years, as the Nehemiah Project’s stature expanded within the county, individuals throughout the community have gravitated to the organization, wanting to help. The group has a core of employees, volunteers and a board of directors. Many of these people have become involved with the organization because of Peters and his outgoing personality.

He loves to dress up as a large, hairy Sasquatch, which is the organization’s mascot, for community events, especially ones involving young kids. This is because the organization’s emphasis on the importance of belief — which Jordan says connects the various towers — easily aligns with the ape-like creature’s “Believe in yourself even when no one else does” motto. 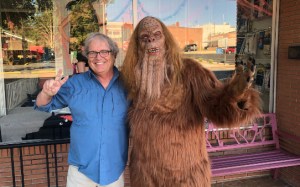 “He’s all about finding people’s passion and purpose, whether you work inside the company or outside the company,” Jordan said. “That’s just his mindset.

“I really feel like Paul wants to leave you better than he found you,” she added.

Even during the first several months of the pandemic last year, when in-person gatherings were largely prohibited, the organization was able to find creative ways to help the public. It made house calls to check in on families and Peters drove around the county delivering care packages comprised of many things including masks, hand sanitizer (that was made in-house), rice and cans of meat and vegetables.

“I was driving around the local community handing off groceries, care kits, diapers,” he said. “It was just a way for us to have an outreach.”

During the pandemic, Peters and other members also helped renovate parts of the Waddell Center. They added new cabinets and benches for the library along with new desks for the facility’s computer lab. Additionally, the group planted flower beds to raise vegetables that will be used in cooking classes at the facility.

It’s these types of personalized outreach efforts along with the continued development of relationships that the organization calls its “special sauce.” 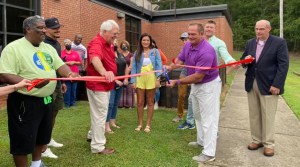 Nehemiah Project has no plans of slowing down anytime soon. It’s got several events scheduled in the coming months, including a Glow Ball golf tournament Nov. 20 at Tillery Tradition Country Club, and the organization is planning to soon expand into Rowan County in a partnership with the county’s EMS agency to help those struggling with addiction. The ultimate goal, once the organization is fully developed in Stanly, is to establish the organization across the state, the country and eventually the world, said Peters, who refers to himself as a “big dreamer.”

And along every step of the journey, Peters and the others associated with the organization have and will continue to put their faith and trust in God.

“God loves and wouldn’t have sent his son to die on the cross if he didn’t love us,” Peters said. “He wants the community rebuilt because he knows when that happens, people’s needs will be met and that’s the ultimate goal for us.”