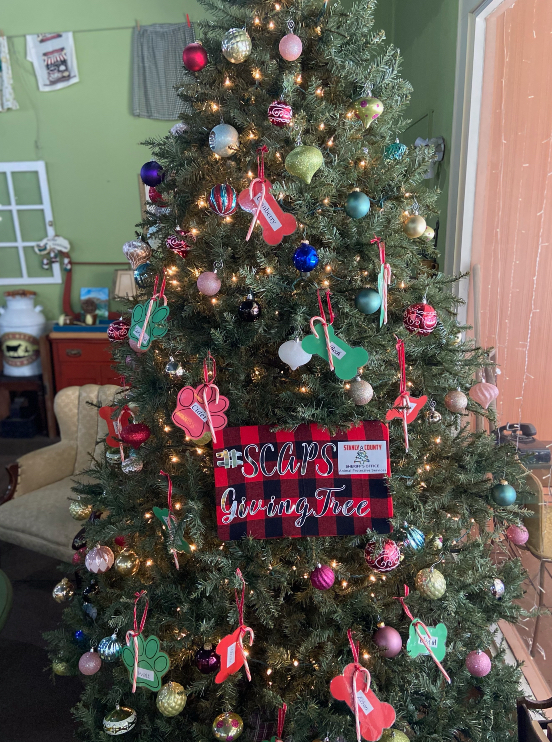 The Giving Tree at Glory Beans allows people to sponsor a pet during the holiday season. Photo courtesy of Jana Aviles.

To encourage more people to adopt, Stanly County Animal Protective Services will have several holiday events and promotions within the next couple of weeks.

Through Dec. 20, adoption fees will cost $25 thanks to a grant from the Bissell Pet Foundation. Individuals must have their application approved before taking part, which can also be completed at the office. Adoptions typically cost $100.

“This will be our first holiday special,” shelter manager Jana Aviles said, noting that there have been a few applications already pending.

The shelter, at 1037 Coble Ave., has also put up a SCAPS Giving Tree at Glory Beans CoffeeHouse in downtown Albemarle, which will also be up through Dec. 20 and includes names of pets along with wish lists of what items they would like for Christmas. Similar to Angel Trees found in many malls, people are encouraged to pick a name from the tree and bring presents to the shelter for their sponsored animal.

Finally, Dec. 23 through Jan. 6, 2022, there will be a foster promotion, where people can come to the shelter to pick up a pet to take care of during the Christmas holiday. Food, litter and bags of toys will be sent home to the families. Applications are available on Facebook.

“The fosters would just be responsible for providing them love and giving them somewhere to be over Christmas and New Year’s,” Aviles said, noting these families would also have the chance to adopt the animals once the period ends.

Thirty-six animals were part of a similar foster promotion during Thanksgiving, of which three have since been adopted. Aviles is hoping at least 40 animals will get placed in homes during the holiday season.