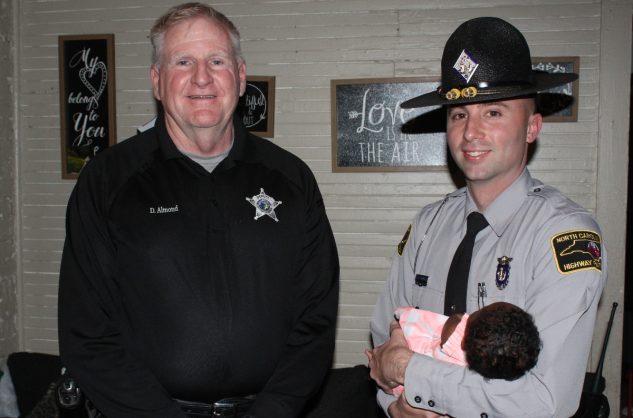 A Stanly County sheriff deputy and a state trooper who helped save the life of a baby in Badin who underwent cardiac arrest last month received an early Christmas present as they were reunited with the child and her family shortly after the girl was released from the hospital.

Deputy Darnell Almond, who is part of the Sheriff’s Office’s lake patrol and has been in law enforcement for almost 30 years, was talking with Michael McCormick, a trooper with the State Highway Patrol, while on duty in Badin on Nov. 5 when a 911 call came through.

“I should have gone home, but I had gotten sidetracked talking to Trooper McCormick who had happened to be in Badin,” Almond recalled.

A life was likely saved because he remained in town.

It was around 10:52 p.m. when Almond and McCormick received the dispatch about an individual in West Badin suffering from cardiac arrest, though no more specifics were given out.

“When we got the call…I didn’t know at the time it was an infant,” Almond said. “Cardiac arrest is obviously one of our top priority calls. We were going just as fast as safely possible to get here to see what was going on and see if there was something we could do.”

When responding to a cardiac arrest call, every second counts and so fortunately, both officers were less than a mile from the home.

“I was like, that’s just right over here, I know where it’s at,” Almond said. “And without question, Trooper McCormick was like, ‘I’ll go with you.’ ”

It took less than a minute for both Almond and McCormick to arrive at the home on Marion Street. They were on the scene so quickly that Octavia Harris and her family were still listening to instructions from 911 dispatch about steps needed to help the child.

“We had just laid her down for the night, and I walked into the kitchen to get something to drink,” Harris recalled. “I came back to check on her as I normally do about 10 minutes later, and she was just limp. She wasn’t breathing…so I picked her up and hit her on the back to try and stimulate her breathing, but nothing.”

Once at the house, the officers found 1-month-old Ameliah on the couch unresponsive. McCormick quickly began administering CPR on the small child while Almond checked for signs of breathing and felt for a pulse. The baby was taking a breath roughly every 30 seconds, McCormick recalled.

After roughly four to five minutes of providing the life-saving care, Badin firefighters and Stanly EMS personnel arrived and quickly transported Ameliah to Atrium Health Stanly. She was then transferred to Novant Health Presbyterian Medical Center in Charlotte.

“There was a lot of praying and a lot of talking to that baby going on in the house that night,” Almond said. “It was God who did answer the prayers.”

This was not Almond’s first time helping to save someone during a stressful life or death situation this year. In March, he and a wildlife officer performed CPR on Russell Kraus from Albemarle, who had stopped breathing after his vessel capsized in Falls Reservoir. Fortunately, after a few minutes, Kraus was able to breathe on his own again. He has since fully recovered and even went kayaking with Almond and the wildlife officer over the summer.

Still worried and concerned for the child even after she was taken to the hospital, Almond remained in Badin until he received an update about Ameliah’s condition.

After about an hour of anxiously waiting, Almond estimates, Badin Fire Chief Terry Eudy met with him and delivered some much needed good news: The baby began breathing normally during the ride to the hospital. Almond immediately called McCormick to relay the information.

A huge weight was suddenly lifted from his shoulders upon hearing the news.

“Me and trooper McCormick, neither one of us would have slept any (if anything had happened to the child) because we both have small children,” he said.

It was determined that Ameliah suffered from respiratory syncytial virus, or RSV, a contagious virus that infects the respiratory tract of most children before their second birthday, according to the Mayo Clinic. Though usually mild, RSV can cause severe infection in some people, including babies 12 months and younger.

“She had a cold and the cold turned into a respiratory infection,” Harris said.

Ameliah remained in the hospital for several weeks before being discharged Dec. 1. The family was happy and relieved once she was allowed to go home.

“I don’t know what we would have done if she hadn’t come back home,” Harris said. “Our world would be completely different.”

She is extremely grateful to the first responders, especially Almond and McCormick, whose quick response played a key role in helping to save her child’s life.

“Had it not been for them, we don’t know what would have happened,” she said, referring to the officers as Ameliah’s “guardian angels.”

Looking back, Almond called it fate that both he and McCormick were in such close proximity to the baby’s home when they answered the dispatch call.

“There’s no doubt in my mind that God had a plan and he put us there at the right place at the right time,” he said. “And that was a good plan.”

Almond is also thankful that McCormick was part of the plan, saying it was a “blessing” that he didn’t hesitate in going with him to respond.

“I am always going to be indebted to Trooper McCormick for going with me,” he said. “He didn’t have to go, but he was like, ‘I’ll go’ and he didn’t just go man, he jumped in.”

For Almond, being back in the house and reuniting with Ameliah and her family only a few weeks after helping to save her life is a moment he will never forget.

“That is a time in my life that is etched in stone,” he said.

“That was the best Christmas gift that I could ever have, seeing Ameliah back with her family,” he added.

Charles Curcio contributed to this story.