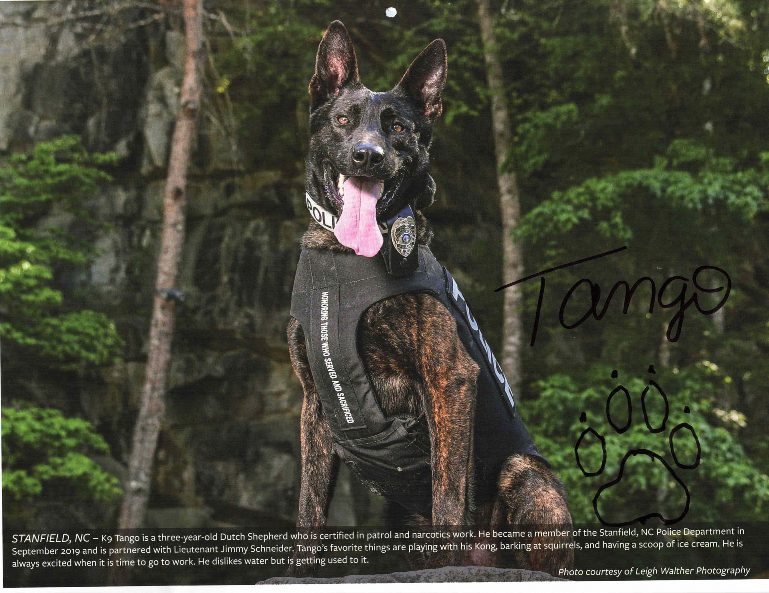 Stanfield's K-9 Tango appears in the Februrary section of a 2022 calendar from Vested Interest, a nonprofit that provides assistance to law enforcement dogs across the country. Photo courtesy of Wanda Yow.

Stanfield K-9 officer Tango was selected out of roughly 4,000 other K-9s nationwide to be included in next year’s Vested Interest calendar.

Tango, who is a 3-year-old black Dutch shepard, is featured as Mr. February and was the only dog chosen among the many law enforcement agencies in North Carolina.

The news was presented to the Stanfield Town Council during its meeting last week.

The dog was acquired by the Stanfield Police Department in 2019 from Ventosa Kennel, a police K-9 training facility, in Scotland Neck near Rocky Mount. He has been working with partner Lt. Jimmy Schneider ever since. 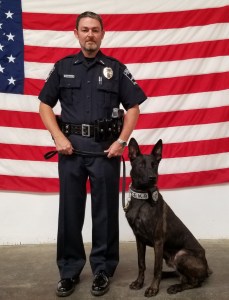 Vested Interest is a nonprofit whose mission is to provide bullet- and stab-protective vests and other assistance to dogs of law enforcement and related agencies throughout the country. Since 2009, the organization has donated almost 4,500 K-9 ballistic vests, 1,800 K-9 opioid reversal Narcan Kits to help reverse the effects of overdoses and $93,000 in K-9 medical first aid kits, according to its website.

Vested Interest first supplied Tango with his vest so he was on their radar and in March, they reached out to Schneider asking if Tango would appear in the 2022 calendar. He said the organization loved how Tango looked in his vest.

“It was a huge honor, I was actually shocked,” Schneider said about getting the call. “You can go your whole career and not have something like that happen.”

Schneider took Tango to Carrigan Farms in Mooresville where the photoshoot for the calendar took place.

All proceeds from purchasing the calendars will go to continuing to provide equipment and services for law enforcement K9s nationwide.

If interested in ordering a calendar, people can go to vik9s.org/product/2022-vik9s-calendar/.