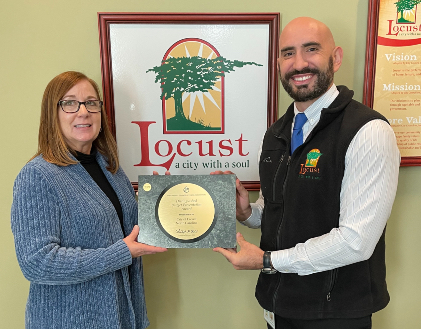 The City of Locust recently received a national award as a result of the detail and transparency displayed in its 46-page budget message to the public this year.
During Thursday night’s council meeting, City Administrator Cesar Correa presented the Distinguished Budget Presentation Award to Mayor Steve Huber and the council members.

This was the first year Locust had applied for the award, which was established by the Government Finance Officers Association, and as far as Correa knows it is the only municipality in Stanly County to have received it.

According to the GFOA’s website, more than 1,600 governments, including states, cities, counties, special districts and school districts, have been recognized for transparency in budgeting.

To earn recognition, “budget documents must meet program criteria and excel as a policy document, financial plan, operations guide, and communication, too,” according to the website.

“This document was created to give the citizens of Locust a clear understanding of our budgeting process, fiscal policy, and how the City Council is carefully appropriating public funds,” City Administrator Cesar Correa said after the meeting. “It is proof of our efforts to promote transparency and to uphold the public’s trust in city elected officials and city staff. We are very proud to present this award to the citizens of Locust as a symbol of our commitment to our mission: To plan and prioritize for the citizens’ well-being through equitable and quality services, focusing on cost-effective government.”
Several council members took time during closing comments to highlight the efforts of Correa, finance director Stephania Morton and other city staff who played roles working on the budget.
“The award that was given — it’s easy to see the opportunity, but when you realize the effort that you have to put into it and the time that it takes to compile something that is recognizable in the whole United States of America…that is awesome,” said Councilman Roger Hypes.
Locust’s budget for the 2021-2022 fiscal year, which was adopted June 10, began July 1 and will run through June 30, 2022.
The 2021-2022 budget keeps the property tax rate at 36 cents per $100 valuation, the 24th straight year Locust residents have not seen a tax increase, and totals nearly $4.7 million for the General Fund and Enterprise Water Fund, a slight increase from the previous fiscal year’s city budget of $4.4 million.