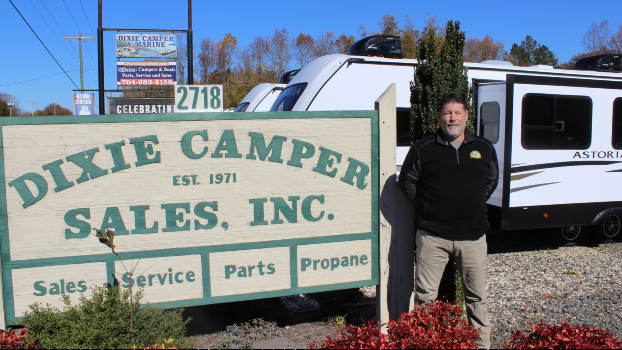 Dixie Camper and Marine Sales has been part of Barrett Burleson's family since it opened in 1971.

It’s a momentous milestone for any locally-owned business to reach 50 years of service — even more so when that business has been run by the same family for all those decades.

Such is the case for Dixie Camper and Marine Sales, at 2718 U.S. Highway 52 North in Albemarle, which has been around since 1971. It sells a variety of new and used campers, including Astoria and Trail Runner models, and boats, including Sylvan and War Eagle models.

“It sort of means you’re doing things right,” said third-generation owner Barrett Burleson of the significance of being in operation for half a century.

The business originated with Burleson’s grandfather Joe, who owned the drive-in Dixie Restaurant, which was located on West Main Street. He began selling campers in the restaurant’s parking lot in the late 1960s as a side gig, though because the area was not zoned for the specific purpose, he had to stop.

Joe Burleson soon rented property in the city along N.C. Highway 24-27 and started selling campers full-time. The business was officially incorporated in 1971. Soon after, his son Mickey began helping and a few years later, in the mid-1970s, his other son Larry moved his family to Albemarle from Asheville. The Albemarle location was soon moved to its current spot along U.S. 52.

Two other locations, one in Asheboro and another in Myrtle Beach, were opened by Mickey and Larry, who eventually took over from their father, though they are no longer around. The brothers ran the business for many years until Barrett Burleson, who grew up around the business but had worked full-time since he graduated college, took over in the early 2000s.

His plan is to eventually pass the business to his son Preston, who currently works alongside his father and would represent the fourth generation of Burlesons to manage Dixie Camper.

“It’s a sense of pride when you are able to do it,” he said about passing the business to each successive generation. “I do remember the first time my dad did tell me how proud he was of me for running the business and it’s going to give me great pleasure to hopefully tell my son that.” 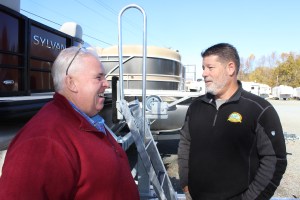 One reason the business, which has only seven full-time employees, has not only survived but thrived for so long is because of the small-scale intimate nature, where everyone knows everyone else.

“When you walk in here, we’re going to treat you like family,” Burleson said, noting he personally knows most of his customers.

The business has also adapted to the changing times. After exclusively selling campers, it expanded operations and began selling boats about five years ago, which has helped to boost sales.

“The bodies of water and all the Uwharries and everything made it a great fit to add the marina end of it,” Burleson said.

So far in 2021, boat sales have accounted for at least 40 percent of total revenue and Burleson expects it to be 50/50 with campers in the near future. Since expanding, many customers have double dipped, buying a camper and a boat, though usually not at the same time.

Unlike many businesses, which have struggled during the past year and a half due to the pandemic, Dixie Camper has thrived — which came as a surprise to Burleson, who was initially expecting to struggle.

“When this thing started, I was thinking, ‘What am I going to do? This is all I know. This thing is going to ruin us.’ ”

But after a few weeks of limited hours Dixie Camper, which was deemed an essential business because many families permanently live in their campers, fully opened back up and saw its revenues skyrocket to a level not seen in at least a decade.

The company saw its 2020 sales increase about 30 to 40 percent compared with previous non-pandemic years and Burleson is projecting this year to be even better.

“It was a surprise, a huge surprise,” he said.

The surge in demand is possibly because so many people wanted to purchase campers and boats as a way to have safe, socially-distanced alternatives to being stuck at home.

“I think with the pandemic, families didn’t want to go to motels or hotels, so they did start to see that they could vacation with the family by camping and boating,” Burleson said.

There has been so much excess appetite for boats and campers that, due to national supply-chain issues, Burleson said he cannot procure inventory fast enough to meet customer demands.

“There’s a tremendous amount of demand and I’ve got 15 campers that I’d love to get in that I may not see for 4-5 months,” he said.

When asked whether Dixie Camper could be around another 50 years, Burleson was optimistic.

“It would not be with me, but I sure hope it will still be around.”