‘I feel proud of myself and happy’: Badin student organizes campaign to help homeless individuals 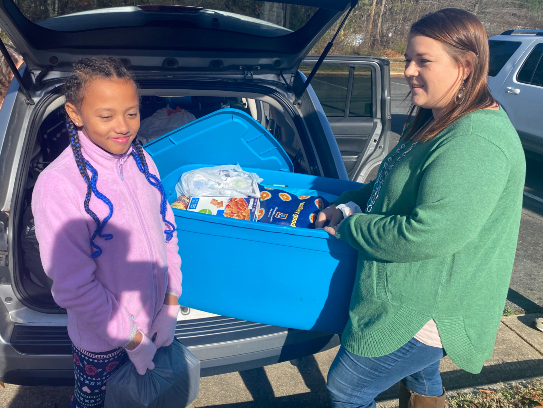 Cali Russell and Amanda Temmermand take in items Russell collected to help the homeless during the holidays.

To help those less fortunate this holiday season, a 9-year-old Badin resident started a campaign to collect food, clothing and other essential items and donated them to Homes for Hope and Stanly Community Christian Ministry. The items were then distributed to the homeless population within the county.

Cali Russell, a fourth-grader at Badin Elementary, came up with the idea last month, after her own experiences seeing homeless people struggling.

“Sometimes when I drive through Albemarle with my grandmother I see homeless people on the street,” she said, noting it is always “heartbreaking” to hear them begging for food and other items that so many people often take for granted.

In order to provide some assistance, she organized her own Christmas project last month around Thanksgiving. She began by distributing handwritten notes to several of the individuals in her grandparents’ Mount Gilead neighborhood, encouraging them to donate.

A blue tub was placed on the front porch of her grandparents’ home for people to place the collected items — and they responded quickly. One neighbor brought three bags of canned food while another went and bought several items, including hand sanitizer and soap. In about a week, she had already received donations from 12 people.

After about a month of action, she collected 68 pounds of canned and nonperishable food, along with clothes, toiletries and other items — much more than she ever anticipated. She personally donated shoes and some old clothes and toys from her house. Her cousins in Raleigh also donated items.

“I felt really happy that people actually cared about other people and were considerate about everybody,” she said, adding she would like to make this an annual event. She also wants to volunteer her time to help feed people at the Community Inn.

“I feel proud of myself and happy,” she said. 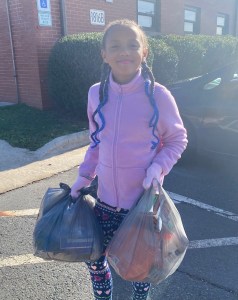 Badin Elementary student Cali Russell organized her own campaign to collect items for the homeless.

Her grandparents were initially caught off guard when they first learned about Cali’s mission to help the homeless.

“We didn’t know about it until she showed us what she was writing and putting on people’s doors,” said grandfather James Russell.

But once they found out, they were quickly on board.

“She’s always been like this, wanting to do for other people all of the time,” said grandmother Denise Russell, who helped spread the word on social media. “I’m filled with so much joy. She makes me proud every day.”

Cali and her grandparents distributed the soaps, hand sanitizers and other hygiene products to Homes for Hope Monday morning before delivering the food and clothing to SCCM.

While officials with Homes for Hope are used to receiving donations, especially around the holidays, typically they come from organizations like churches and schools, not individuals, and especially not children — which made Cali’s campaign all the more special.

“To find an individual, a 9-year-old, is amazing, to have a heart willing to give back and wanting to give back,” said Tiera McDonald, program director for Homes for Hope, who was first contacted about Cali’s project late last week after speaking on the phone with Russell.

The organization recently received help from other kids in the area. Last month, McDonald said students with Carolina Christian School in Locust brought in close to 2,500 hygiene products.

Created in 2005, Homes of Hope is a local nonprofit which works to reduce homelessness in the county by providing transitional housing to families, according to the group’s website. It also operates the Community Inn in Albemarle, which provides people with food and a place to sleep each night.

The hygiene products and other items Cali collected were distributed to families in transitional housing and were also handed out to individuals at the Community Inn, McDonald said.

While already a vulnerable population even before the COVID-19 pandemic, the many obstacles with COVID-19 has only made it harder for organizations like Homes for Hope to adequately take care of people.

“2020 and 2021 have been pretty tough, just because of the limited resources and where people could go,” said Amanda Temmermand, Homes for Hope office manager.

Because of safety concerns, for example, the organization had to cancel many of its fundraising events the last two years, McDonald said, thus relying even more on the charity of groups and individuals like Cali.

For more info about Homes for Hope, people can visit homesofhopestanly.org/home.aspx. Some of the common items needed include pajamas, men’s underwear and T-shirts, coffee, hand sanitizer and laundry detergent. For SCCM’s food pantry, items needed include jelly, cereal, salt and pepper, canned cranberry sauce and lima beans, mayonnaise, pickles and ketchup and mustard.