Peeking Into The Past – Swift Island Bridge 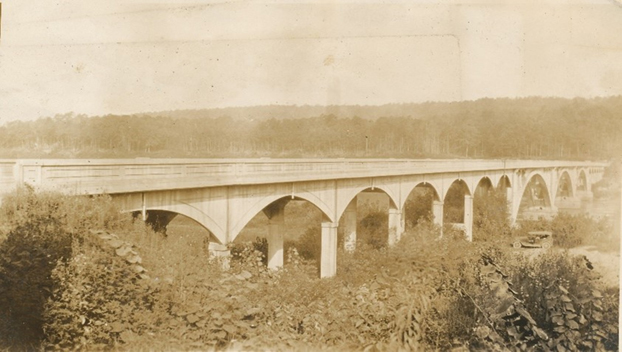 During the early 1900s, Stanly County saw tremendous growth due to the establishment of railroad lines, the development of textile mills and the construction of the aluminum plant in Badin.

At the same time, the state of North Carolina saw a huge increase in the number of people who owned automobiles. These new car owners soon began to push for faster ways to get around the state.

Efforts were made to find a better way to get from Raleigh, the state capital, to Charlotte, the state’s largest city. The route chosen was through Montgomery into Stanly County across the Yadkin-Pee Dee River.

This led to the building of the Swift Island Bridge, seen in today’s photo, that opened in December 1921. This new bridge was seen as a marvel of modern construction.

Its life was short lived, however, as it became necessary to replace the bridge when it was found it would be flooded with the construction of the Tillery Dam just a few years later.

A new bridge was constructed, and the original bridge was demolished in what became known as the Battle of Swift Island Bridge.

One of the bombs from the demolition can be seen in front of the Stanly County History Center on North Second Street in Albemarle.