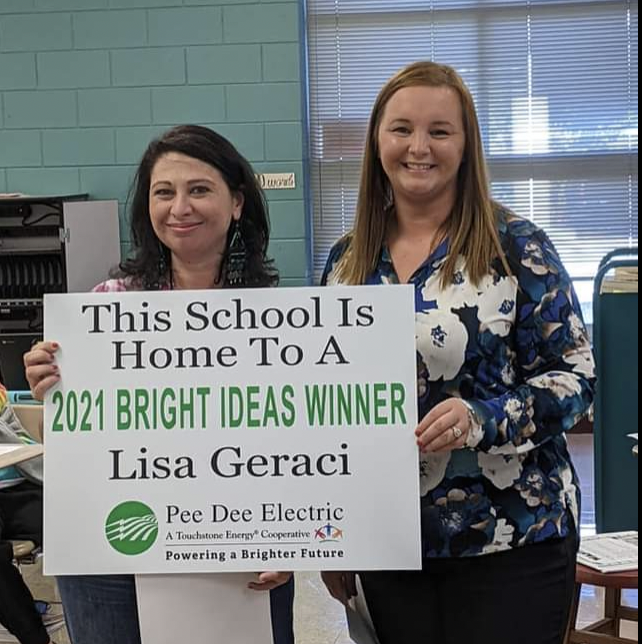 South Stanly Middle School teacher Lisa Geraci with a representative from Pee Dee Electric in October when she found out she was a Bright Ideas grant recipient. Photo courtesy of Lisa Geraci.

Wanting to create a better outdoor environment, a South Stanly Middle School teacher recently received a $1,700 Bright Ideas grant from Pee Dee Electric to create a trail for students and teachers to utilize.

The grant will be used to clear out some of the wooded area behind the school to create a trail, about a mile and a half long, which would be used for students in cross country and for anyone wanting to take a stroll around the property, according to Lisa Geraci, the eighth-grade ELA teacher who applied for the grant.

“We can take the kids out there and walk on it and just make it more of a useful area,” Geraci said.

She first thought about creating some sort of trail last year, when she noticed there were several clear areas outside for a potential path, except for a few pockets of briars and some downed trees.

“I was like, ‘Wow, it would be really nice if kids could walk back here,’ ” she recalled.

She was able to acquire a survey map showing the school has about 36 acres of land. She brought in a local landscaper who told her it would cost about $1,700 to clear the area for the trail.

She applied for the grant in the fall and several weeks went by without any word regarding her application status. It wasn’t until late October when representatives with Pee Dee Electric surprised her at the school to let her know she would be receiving the grant.

“The day before I was thinking, ‘Wow, I wonder what happened? I guess I didn’t get that grant because I never heard back from them,’ ” she said. “And then I was teaching and the principal and another woman came in with a big check…and they said I had won the grant.”

Geraci is still working to find someone to clear the area. Her goal is to have the trail completed by June. Once finished, she would like to add things like benches, bridges and bird feeders, which would help to “heighten the appearance of it.”