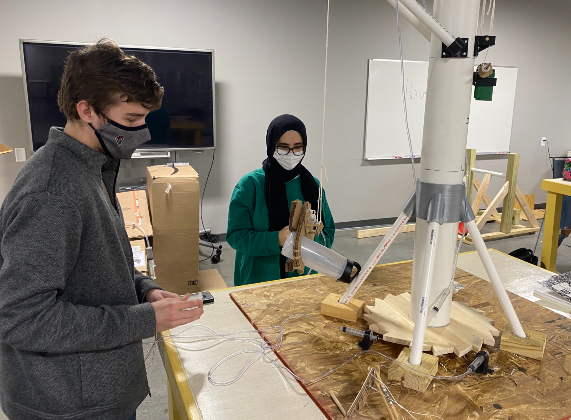 Gray Stone juniors Sean Devlin and Sama Hawari work on a robotic crane that can lift a two-pound object.

Too often in school, success is narrowly measured around whether students pass a host of tests and exams. And for many students, who spend hours each week studying and pouring over notes, they have come to learn that failure is not an option.

But at Gray Stone Day School in Jeff Brown’s Design Lab class, located in a spacious classroom known as the Innovation Lab, failure is not only expected, it’s encouraged as part of the learning process. Over the past two months, Brown’s students have been working in pairs to design and engineer hands-on projects.

Whether building life-size robots and catapults, designing animated videos, erecting self-supporting arch bridges or producing natural dyes, students have learned to be adaptive, realizing that if the first plan doesn’t succeed, that’s OK, as long as they continue to work through their problems to find a better solution.

“They pick the idea, but then they have to do all the design from scratch, figure it all out and then build it out,” Brown said.

While the projects and curriculum are technically STEM (science, technology, engineering and math) in nature, Brown uses the term design lab to describe his classes because he wants the students to be creative and imaginative when building their projects.

“My goal always in this class is that they learn how to think,” said Brown, who was a chemical engineer before becoming a teacher. “I’m really trying to teach them to be creative problem solvers.”

In his classes, failure is not fatal; rather, it’s often the springboard that causes students to pause, reevaluate and think differently towards overcoming problems. Much of the learning is done by simple trial and error.

Though Brown is their adviser, the students are responsible for all aspects of the projects and overcoming any problems that might arise.

“I give them a lot of freedom,” he said. “I’m really just their mentor and their coach because I want them to struggle through and figure it out and come out the other side.”

Seniors Simon Butler and Stephanie Varbanov have been creating a replica of a da Vinci bridge, an ancient design Leonardo da Vinci came up with, using no fasteners or any other modern technology. Every part of the process, from retrieving the wood to hand-cutting it into smaller pieces and assembling the structure, has been completed by the students.

Each project has to meet specific requirements. For Butler and Varbanov’s bridge, it has to be at least two feet tall, span at least three feet and support the weight of someone standing on it.

“No matter how much research we did or how much drawing or sketches we did, nothing ever turned out the way we planned,” Varbanov said. 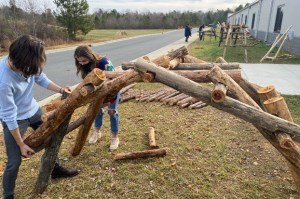 Juniors Sama Hawari and Sean Devlin have been building a robotic crane capable of lifting a two-pound object, in this case, a water bottle, and moving it at least 24 inches. They used a series of connected hydraulic syringes filled with water to power the machine.

“I’ve learned a lot more about engineering and about teamwork, since we’ve been working together for about two months,” Hawari said.

Not all of the projects involve building a physical structure. For juniors Cindy Chen and Lucy Hathcock, most of their work has been done on the computer. They are creating an animated video utilizing old-school techniques such as stop-motion technology. The video must have a plot, be at least four minutes in length and consist of at least 1,000 frames.

“We have to take screenshots of every frame and put it together into a video and we had audio, dialogue and voice overs,” Chen said, noting that every frame is originally hand-drawn. 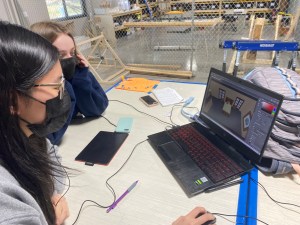