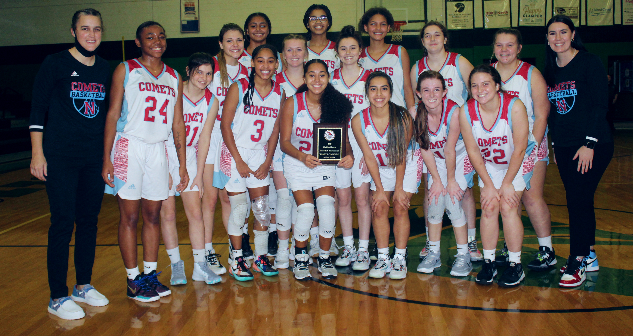 The fourth quarter of the finals of the West Stanly holiday women’s basketball tourney proved how important endurance can be in a tournament playing three times in as many nights.

Leading 39-33 after three quarters, the North Stanly Comets pulled away from the Porter Ridge Pirates and won the championship 57-41.

Bell said the chance to win a championship excited her as well as her teammates.

“I thought we had a very good chance of winning. We are a great team and have the potential to win,” Bell said.

North outscored Porter Ridge in every quarter but only led by 17-14 after one quarter, and 24-19 at halftime.

First-year head coach Regan Allen said the team “wasn’t used to a lot of conditioning,” adding her philosophy was about being in good shape.

“As long as you’re in good shape, everything else will just fall into place,” Allen said.

Team chemistry has been important for the team’s current winning ways, the coach added.

“Every single one of them stepped up to the challenge,” Allen said. “Everybody on this team has a role and is playing an important part.”

North opened with a two-point loss to former conference foe Uwharrie Charter, but through the tournament have won nine in a row.

Allen said the opening-game loss humbled the team “to work hard” and realize “nothing is going to be handed to us.”

The Comets are off until 2022 when North goes to West Stanly Jan. 5 and faces a tough early Yadkin Valley Conference matchup two days later against Albemarle (10-2). Pfeiffer University will host the game between the Comets and Bulldogs.