With the recent emergence of the highly transmissible omicron variant, which has led to a spike in new cases across the country, health officials still say the most effective way for people to protect themselves is to get vaccinated.

Doctors and other health experts have repeatedly expressed that, if infected, unvaccinated people are much more likely to require hospitalization and possibly die than their vaccinated counterparts.

Omicron, which accounted for about 59 percent of all new Covid cases in the United States for the week ending Dec. 25, is two to three times as likely to spread as delta, which caused a huge spike in cases for Stanly residents in the summer and early fall. It is also more likely to infect vaccinated individuals, though vaccines still protect from severe illness.

Stanly has also begun to see a sharp uptick in new cases. There were 305 new cases reported for the week of Dec. 30, per the health department, an 85 percent increase from the week prior and the most since late September. Sixty-six new cases were reported on Dec. 27, according to NCDHHS data, the highest one-day total since 94 were confirmed on Sept. 20.

The county’s positivity rate has increased to about 12 percent. Since July, there have been almost 1,300 Covid cases among children 17 years and younger, according to the health department. Fifteen people were hospitalized last week, four more than the week before.

Since the onset of the pandemic in the spring of 2020, 222 people in Stanly County have died, including nine in December.

After an initial surge in vaccine demand for the first few months of 2021 — around 4,000 people received at least one dose of the vaccine from January through April, the numbers have largely plummeted since, according to NCDHHS data, though there was a brief spike in August, likely a result of fears regarding the delta variant. For November, only about 700 people were vaccinated, down from 800 the month prior. Less than 600 people got vaccinated in December, though those numbers might not be fully updated.

"Our concern is still with those that are unvaccinated who are at highest risk for hospitalization and death due to COVID," Stanly County Health Director David Jenkins said in early December.

Parts of Stanly more vaccinated than others

For a more in-depth look at specific parts of the county, census tract data reveals that of the 13 tracts in Stanly, none have vaccinated 50 percent of the population, though several parts of Albemarle and Badin are close. The data runs through Nov. 30, so some of the data may have changed.

There doesn't appear to be any correlation between more populated areas and higher vaccination rates, but there does seem to be a connection when it comes to race. In two of the three tracts where Black people comprise at least 20 percent of the population — downtown Albemarle and around Badin — the vaccination rates are the highest in the county, at 47 percent and 45 percent, respectively.

And according to state health data, it appears that people of color have gotten vaccinated at a higher rate than their white counterparts, though still at a low rate overall and a large portion of the data is suppressed. From the data that is available, 48 percent of all Hispanics and 44 percent of Black people in the county have received at least one vaccine dose, compared with 41 percent of white people. 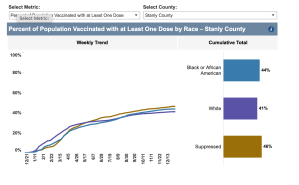 "It's alarming and difficult to convince individuals, regardless of ethnicity, to engage the vaccinations, wear mask and social distance," said Garry Lewis, chairman of the Stanly County Minority Health Council. "I encourage Covid-19 compliance to the public to take vaccinations/boosters especially during the flu and cold seasons until the pandemic has subsided."

Here is a look at each of the 13 tracts and the vaccination percentage for people age 5 and older: