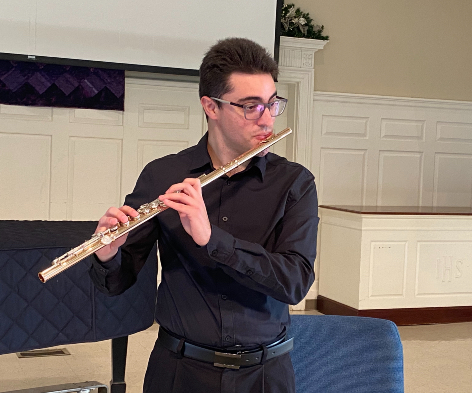 Professional flutist Ricardo Gil has been teaching music at Gray Stone Day School since August. His goal is to create a band program within the middle school.

Middle school students from Gray Stone Day School were treated to an intimate concert last month inside the Henry Pfeiffer Chapel from a professional flutist who also happens to be a new music teacher at the school. He performed several pieces, incorporating unconventional playing techniques such as humming and over-blowing to produce several notes at the same time.

Having been at Gray Stone since August, Ricardo Gil, who teaches introductory music courses at the middle school, is still getting acquainted with the students and the environment. However, he has plans, including creating a band program.

“I’ve really enjoyed it,” he said. “I love working with the students.”

Growing up in the Dominican Republic, Gil cultivated a love for music at an early age during time spent with his grandfather, who played the clarinet and saxophone and listened to an array of styles from classical music to meringue.

“The music just started to get stuck in my head,” he said, so much so that Gil informed his parent he wanted to become a musician.

He started taking music lessons and began playing a variety of instruments, including the piano and violin. But it wasn’t until he was around 15, when he went to a concert and listened to internationally renown flutist James Galway, that things began to fall into place.

“I was just amazed by his technique and how he could play that instrument and sound that way,” Gil recalled. “I was captivated by it.”

He quickly purchased a flute and began learning how to play. He ended up attending a conservatory, where he practiced several hours a day for many years, working to perfect his skill.

Gil eventually left his home country to come to the United States, where he received a degree in flute performance from Indiana State University. During that time, he was able to perform in venues around the world.

After receiving his master’s degree from the UNC School of the Arts in Winston-Salem, Gil began looking for jobs online when he found Gray Stone was in need of a music teacher.

Having never taught before, Gil said he’s learned the ins and outs of the job from his wife, who is also a music teacher. Beyond teaching the basics of how to read music, Gil has taught his students topics such as music theory, careers in music and musical styles from around the world to help broaden their horizons.

And his students have not been the only ones who have learned a thing or two. He has been teaching himself and his students to play the guitar, an instrument he had never played before coming to Gray Stone.

“I’m learning with them and it’s fine,” he said.

Being a relatively young instructor has helped Gil, 25, better relate to his students and what they’re going through. He said it’s also made him wise to any tricks that they might pull.

More than anything, Gil wants to foster in his students the same love of music that he discovered as a young child and that has helped transform his own life.

“Music makes you a different person, it makes you a better person because it soothes your soul and your heart,” he said. “I want them to have the full experience of what we call music therapy.”