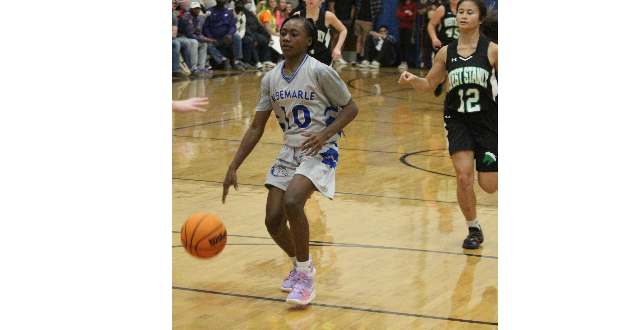 The Bulldogs got big performances from four players scoring in double figures as Albemarle (10-3) won 69-50 over Montgomery Central (3-5).

Freshman Amari Baldwin put up big numbers for the Bulldogs with 21 points and 12 steals, adding eight assists and seven blocks. Baldwin is averaging double figures this season in points and steals.

Freshman Jasmine Brown added a double-double with 18 points and 10 rebounds along with four blocks and two steals.

Sophomore Kai Spencer had a double-double for the ‘Dogs with 13 points and 10 boards. She also blocked two shots, while freshman Jordyn Crump contributed 11 points and six steals.

The win was the Bulldogs’ ninth in the past 10 games.

Albemarle will be the home team Friday night at 6 when the Bulldogs host rival North Stanly in a game at Pfeiffer University.

Albemarle made it three wins in a row with a 63-54 win over the Timberwolves.

Malakhi Gatewood led the Bulldogs (5-5) with 18 points while Omare Price and Ali Currie added 11 each.

Leading by one after three quarters, Albemarle pulled away in the fourth by outscoring the Timberwolves 25-17 for the win.

The Bulldogs are scheduled to host North Stanly at 7:30 p.m. at Pfeiffer University.