“It’s an exciting time to be working here,” says Molly Alexi, who assumed the directorship of the Stanly office of the North Carolina Cooperative Extension Service in the fall.

A native of Charlotte, Alexi brings 18 years of Cooperative Extension service to the position, as well as two years as a teacher with Stanly County Schools. 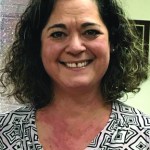 “I taught kindergarten at East Albemarle Elementary from 2001 to 2003,” she said, “and at the same time I was involved with the West Stanly Center of the Stanly County Partnership for Children… that’s where I learned about what Cooperative Extension offers.”

Alexi found the wide scope of services and program offerings provided by the Extension Service to be “overwhelming.”

“I knew then that this was something I wanted to be a part of,” she said.

Soon afterwards, an opening for a Family and Consumer Sciences agent at the Stanly County Center became available, but filling the position was delayed by a hiring freeze. Continuing to teach, Alexi was later able to move into the vacant slot after completing the school year.

After six years in Stanly, she advanced to posts in Montgomery and Guilford before returning.

Even though she had been working with a much larger staff and service area in Guilford, Alexi saw the opportunity to serve as director in Stanly as quite attractive.

“When Lori (Ivey, former Stanly Center director) had her retirement reception, I attended and it was like a reunion, seeing all my friends and former co-workers,” she said. “So when the position was advertised, I decided to go after it.”

Alexi described advantages of working in Stanly, including her co-workers, as well as the spirit of cooperation among public agencies.

“Andy has been very helpful,” she said of County Manager Andy Lucas. She described her own staff as “excited and enthusiastic.”

Stanly County’s agencies exhibit a willingness to “collaborate and work together that is not as evident in larger communities,” observed Alexi, citing some of the partnerships between Cooperative Extension and agencies such as Stanly County Health Department, Stanly County Family YMCA, and Parks and Recreation agencies as examples.

“When we are able to pool resources, we can do more for the community,” she said.

Alexi cited an example of her staff’s resourcefulness and passion for their work in the group’s response to the COVID-19 pandemic.

“We never stop,” she said, “but we had to adapt when the pandemic hit.”

Adaptations included implementation of online and hybrid classes, which actually opened some doors and resources that had not been tapped earlier.

“The pandemic resulted in people staying home, and the number of people who grew gardens increased,” she said. “In turn, there was a demand for classes in gardening, cooking, freezing, canning and nutrition. We were able to implement these through Zoom, and we actually were able to tap into resources from other places that we had not used before. It led to partnerships in other states and nations.”

One of the more familiar Cooperative Extension programs, 4-H, was more hard-hit by the pandemic than others, said Alexi.

“We were unable to hold 4-H meetings effectively,” she said, noting that with quarantines and shutdowns on the decrease, an effort to rebuild the program is underway.

“We really need volunteers to help with this,” said Alexi, noting that “agents can only do so much” in reviving the program.

For those who wish to meet the entire Cooperative Extension staff, a meet-and-greet is scheduled for 2-4 p.m. Jan. 25 at the Stanly County Agri-Civic Center.

“We have a number of new staff, and we invite everyone to come out, meet our team and learn about what we do in the community,” said Alexi.