Board members volunteer in schools by feeding students, cleaning due to staff shortages

To ensure the proper functioning of several schools in the district suffering from a lack of classified staff, especially cafeteria workers, as a result of the COVID-19 pandemic, school board members on Monday took a literal hands-on approach in providing assistance.

Several members, including chairwoman Glenda Gibson and vice chairwoman Carla Poplin, volunteered at schools across the county, working in the cafeteria and performing custodial tasks.

“I really enjoyed being at the school,” said Gibson, who worked at Eudy Elementary, which was without 17 staff members on Monday. “That’s always great when you get to be in the school.”

Superintendent Jarrod Dennis reached out to the board a few days ago, letting them know that because of Covid, the district was experiencing staffing issues, especially when it came to child nutrition. Gibson said she and other members would be willing to help. Soon after, Makayla Mabry, district’s director of child nutrition, got in contact with Gibson and other board members to come up with a specific game plan.

“She just told us she needed some extra hands if we knew of anybody and we were like ‘Can we help?’ and she said ‘sure,’ ” Poplin said.

In addition to Gibson going to Endy, Poplin went to Central Elementary, Dr. Rufus Lefler traveled to Albemarle Middle and Bill Sorenson went to South Stanly Middle. Several of the other board members who had prior obligations Monday will try and find other days to volunteer their time, Gibson said. 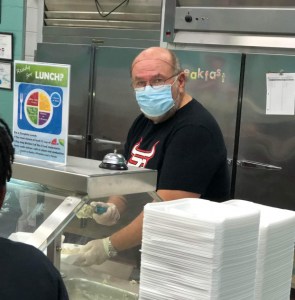 Each of them spent much of the day working in the cafeterias. The extra support was critical because if students cannot be properly fed, they cannot remain in school for a full day, Poplin said.

Gibson spent the majority of the day in the cafeteria, where she learned to operate the school’s dishwasher, but she also picked up some custodial duties, including mopping the hallways and dusting the tops of lockers. “I did a little bit of everything that day,” she said, noting her clothes were wet by the time she left. 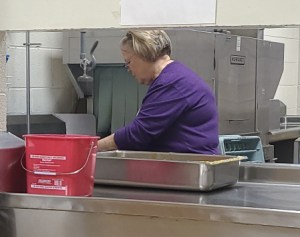 A former teacher, Gibson acknowledged to Endy Principal Jodi Autry that even though she was “as out of her comfort zone as possible” she wanted to do whatever was needed to relieve some of the burden on the limited classified staff.

“They showed me very quickly things what I needed to do and I picked up on it,” she said.

One of the highlights for Gibson was serving food to the students.

“I bet you at least 75 to 85 percent of those little children looked at me and said ‘thank you,’ ” she said. “That was just awesome.”

Gibson left the school with a greater appreciation for the classified staff, who don’t usually receive the same attention as teachers. And Autry was left with deep appreciation for Gibson’s work.

“I always tell my staff that leadership is not a position or title, it is action and example,” Autry wrote in an emailed response to the SNAP. “Mrs. Gibson defined that message and put actions behind her support. Like so many other schools, the Endy staff always pulls together to accomplish big things. However, when the staff saw Mrs. Gibson working shoulder to shoulder in the cafeteria and willing to do anything, it encouraged them to continue doing whatever it takes for these students.”

The plan, Gibson said, is for board members to continue providing assistance throughout the remainder of the week, so the district can be on solid ground next Thursday, when the district is set to officially be enrolled in Duke University’s test-to-stay study, which will hopefully cut down on the number of students and staff needing to quarantine. The district has already received test kits and properly trained its nurses and other staff.

“I’m just trying my best to get us through to where we start this test-to-stay next week,” Gibson said.