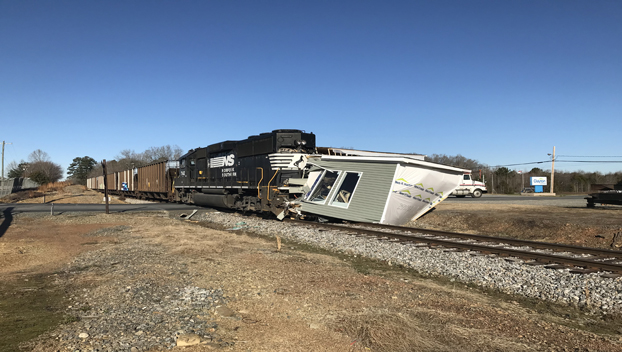 A train crashed into a mobile home Tuesday morning.

According to Lori Walters, a safety team representative of Clayton Homes, said their truck was leaving the facility near Richfield with the mobile home attached. While crossing the railroad tracks, the truck’s drive shaft broke, leaving the trailer across the tracks, Walters said.

A Norfolk-Southern freight train, approaching from the north around 8:30 a.m., was unable to see the truck because of sun glare and could not stop in time, Walters said.

There were no injuries, according to Walters and the incident did not affect traffic on U.S. Highway 52.

The incident is being investigated by the North Carolina State Highway Patrol.

The train was traveling about 10 miles-an-hour, according to Trooper B.L. Baucom.