Zaman Rashid, who earned a B.S. degree in Business Management and Leadership from Pfeiffer University in 2015, had to overcome some pretty harrowing circumstances before finding himself in Misenheimer. Now, he uses his education to help others.

Rashid established and runs Supporting Education-Achieving Dreams (SE-AD), a Charlotte-based charity that helps Afghan nationals in a variety of ways. The seeds for such a venture were planted in 2004 when Rashid, then 12, traveled alone by bus throughout Afghanistan in search of doctors who could remove a life-threatening congenital sinus tumor on his face. 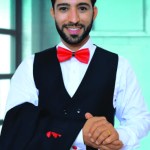 “That experience was so horrible that it caused me to question so many things,” he said during a break at work in Charlotte, where he works in technology. “I knew I had to do something.”

Rashid described an “extremely dangerous” journey, in which he was hungry, freezing and scared of being shot or kidnapped. At one point, still hundreds of miles away from its final destination, the bus had to stop at an old inn because of inclement weather and a deteriorating security situation.

Female passengers stayed in rooms that had recently been flooded, and the male passengers, including Rashid, had to stay outside in the rain and cold. Suddenly, gunfire erupted, and the Taliban stormed the inn, beat people and demanded that they give them food.

Eventually, Rashid found doctors and underwent surgeries in Afghanistan, but all were ultimately unsuccessful. In 2007, though, his luck began to turn. Thanks to the help of an international aid organization in North Carolina, he left Afghanistan for Winston-Salem, where doctors at Wake Forest Baptist Medical Center successfully treated him. After returning to Afghanistan for three years, he came back to North Carolina, where he enrolled at Pfeiffer after a stint at Central Piedmont Community College.

SE-AD, which was founded in 2014 while Rashid was still at Pfeiffer, once focused on advancing educational opportunities for Afghans. It now has several other purposes. It alleviates hunger among Afghans in Afghanistan, where unemployment has soared following the withdrawal of U.S. troops.

Rashid notes that when the Americans left, they took a lot of jobs for Afghans with them. He also said the Afghan government no longer has money to pay government employees such as teachers.

“With a little money, though, we have been able to help so many people,” Rashid said. “For example, a $200 donation can buy a month’s food for a family of five to seven people.”

Finally, SE-AD has begun helping Afghans who’ve recently relocated to the Charlotte area adjust to life in their new home. This assistance takes many forms.

As Rashid reflects on his current situation, he expresses gratitude for the role Pfeiffer has played in it. He described an institution willing to help him defray tuition and other costs through various scholarships. He became a member of the men’s swim team, joined a club for international students, participated in Future Business Leaders of America-Phi Beta Lambda and became involved in many Pfeiffer Life events.

“My time at Pfeiffer was just an amazing experience,” he said. “I miss it.”

Rashid’s future seems pretty clear. He got married about five months ago and intends to raise a family here. He plans to become a U.S. citizen in a couple of years.

“My hope is to build a life here, but continue to deliver support to people who need it,” he said.