In 1998, Joshua Cross earned a B.A. degree in 2D Art from Southeast Missouri State University. This credential, along with an MFA degree in painting from Kansas State University, would help him land work at Pfeiffer University, where he’s an associate professor of art. Along the way, he also developed a love of history and considered teaching that subject in high school.

The mural, a wall wrap of digitized images spanning a three-story window-enclosed stairwell, can be viewed by pedestrians heading east on Albemarle’s Main Street. The design creates a multi-level collage that includes historic figures and local community leaders to tell the story of rural medicine in Stanly County and the history of the physician assistant and occupational therapy professions. 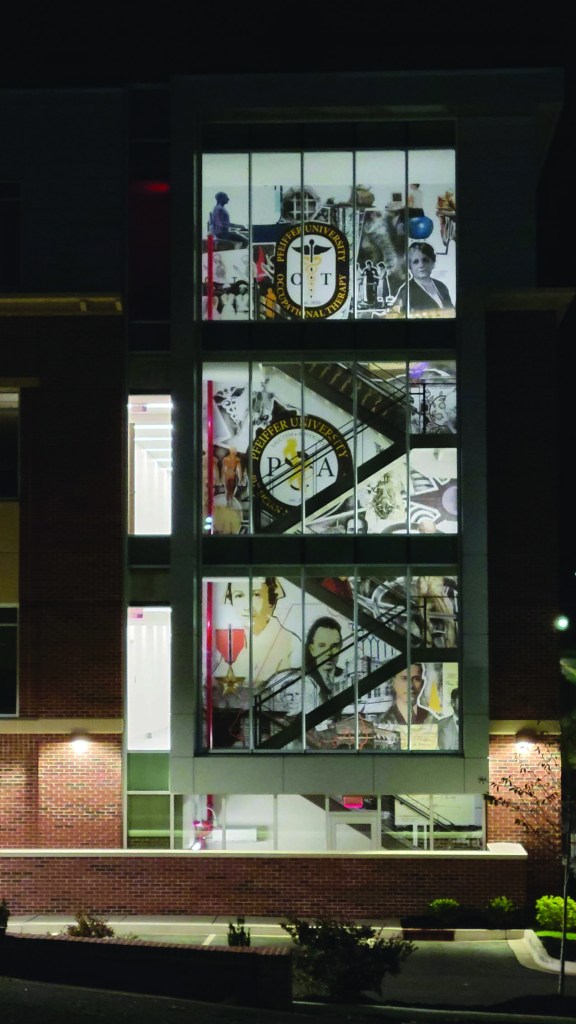 Among other things, the mural’s first floor depicts the first hospitals in Stanly County, and it introduces key figures including Dr. Francis Kron (1798-1883), an early Stanly County physician, and Pearl Ada Morris, a nurse from Stanly County who won the U.S. Army Bronze Star during World War II.

The second floor recognizes several figures of importance to the physician assistant profession, including Dr. Eugene Stead, Jr. (1908-2005), who is credited as the founder of the profession after developing the first PA curriculum at Duke University. An image of Anne Louise Keeney (1933-2017) is also on the mural’s second floor. Keeney is the namesake of the Anne Louise Keeney Chair of Physician Assistant Studies, which is held by the director of the MS-PAS program.

The third floor features William Dunton, Jr. (1868-1966), the founder of the American Occupational Therapy Association, and it recognizes female reconstruction aides for their work in the development of occupational therapy during World War I.

“Cornerstones & Crossroads” also features silhouettes of iconic imagery from Stanly County and from Pfeiffer’s campus in Misenheimer, where the MS-PAS and MSOT programs were conceived. The Pfeiffer images include the stairs of Goode Hall and the statue of Emily C. Prudden (1832-1917), who founded the first of several schools in western North Carolina, including Oberlin Home and School, which eventually became Pfeiffer College.

Cross said he spent at least 150 hours on creating “Cornerstones & Crossroads,” with about half of that time devoted to research he described as a large scavenger hunt. He credited several experts for their assistance, including Megan Sullivan, the museum manager of the Stanly County History Center; Dr. Elizabeth Fain, the director of MSOT; and Dr. Brenda Diaz, the former director of MS-PAS. 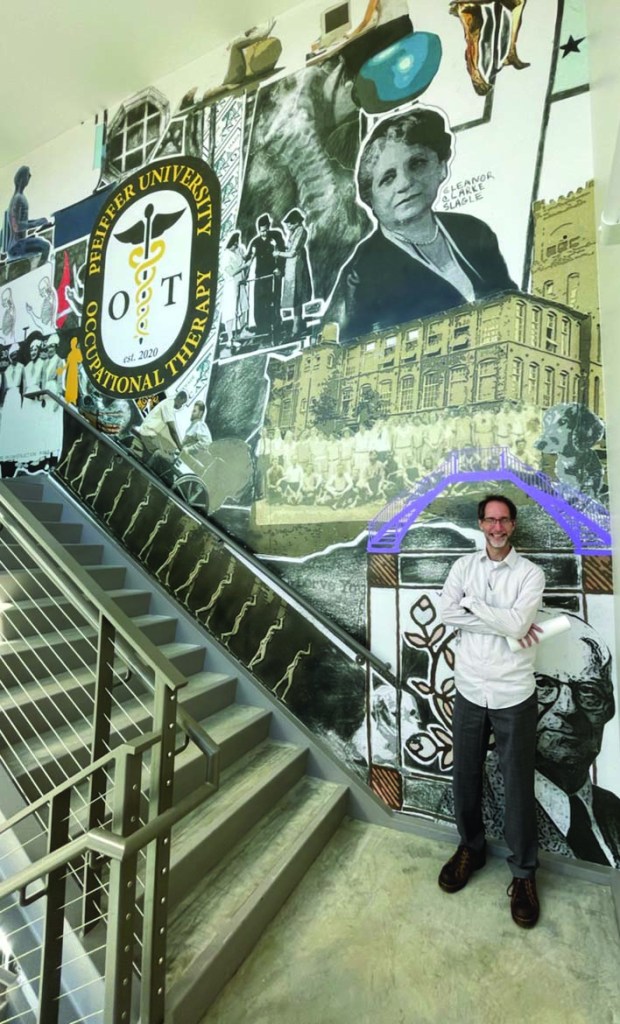 “It is our hope that the mural for this space will serve as a testament to the rich history of Stanly County and Pfeiffer University, and that it will honor our partnership, our collective past and our vibrant future,” said Dr. Scott Bullard, Pfeiffer University president. “Pfeiffer is pleased to be an economic driver for our communities, and we are honored to train physician assistants and occupational therapists who will meet critical market need and impact significant healthcare disparities in our region. ‘Cornerstones & Crossroads’ is a fantastic reflection of where we have been, and where we plan to go.”

Exterior signage for “Cornerstones and Crossroads” is scheduled for installation at the Center for Health Sciences, near the stairwell location, and will outline the symbolism of key mural elements for visitors.