Storm to unleash dangerous snow, ice from Atlanta to Raleigh

The biggest winter storm so far this year is set to slam the eastern U.S. over the extended holiday weekend, which will be the backdrop for a weather event that could evolve into an all-out ice storm for cities along the Interstate 85 corridor. Millions of residents across Georgia, Virginia and the Carolinas should brace for the developing storm that could lead to considerable disruptions to everyday activities and widespread power outages that may last for days after the storm departs, AccuWeather forecasters warn.

The storm will charge in a little more than a week after two storms brought traffic-snarling snowfall to the Southeast. This time, however, the winter weather will bring more than just the threat of snow for areas farther south than just Kentucky, Tennessee and Virginia.

A winter storm watch has already been issued for portions of South Carolina, North Carolina and far northeastern Georgia due to the anticipated snow and ice.

Atlanta hasn’t recorded measurable snow for more than 1,450 days, the second-longest streak in the city’s history, but that streak may end this weekend with the upcoming storm. Outside of the mountains, only an inch of snowfall is likely to fall over northern Georgia, but that’s more than enough to make the roads slick as well as break the snowless streak, which would happen should more than 0.1 of an inch of snow and sleet accumulate.

The biggest threat in the Southeast from this storm, however, will be from freezing rain, AccuWeather forecasters caution.

“While much is going to be said about the snow across much of the central and eastern part of the country with our latest winter storm,” AccuWeather Chief Meteorologist Jonathan Porter said, “I want to make sure we don’t lose track of the significant ice storm risk.” Porter pointed to “parts of North and South Carolina as well as portions of Virginia where amounts could easily exceed half an inch of ice” as places that could face the biggest threat from icy precipitation. 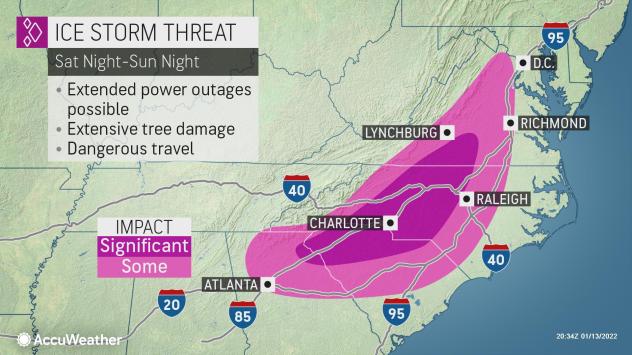 “This situation is similar to a number of previous ice storms across the region, and for that reason, we at AccuWeather are increasingly concerned about a major ice storm from northern Georgia through the Carolinas and into central Virginia,” AccuWeather Meteorologist Randy Adkins said. “The area of greatest risk appears to be from upstate South Carolina through western Piedmont of North Carolina, potentially including Charlotte.”

From 1 to 3 inches of snow and sleet is forecast to fall on the Queen City, and when combined with a thick glaze of ice from freezing rain, travel may become dangerous to impossible from Saturday night to Sunday.

Other cities in the region are at risk for a significant build up of ice that may or may not be accompanied by accumulating snow. These include Atlanta; Greenville, Spartanburg and Columbia, South Carolina; Fayetteville; Winston-Salem and Raleigh, North Carolina, and Danville and Richmond, Virginia.

Extended power outages are possible in this region as tree limbs snap and power lines are weighed down by ice accumulation. People who live in this zone should prepare sooner rather than later for potential power outages that last at least into the start of next week.

“Should 0.50 of an inch to 1 inch of freezing rain accrue on trees and power lines in part of this zone, as feared, major infrastructure damage could occur and the power could be out for a week or more in some cases,” AccuWeather Senior Meteorologist Alex Sosnowski said, adding that a saving grace would be for more sleet or snow to fall rather than freezing rain.

The last major, widespread ice storms to affect North Carolina occurred in February 2021, according to AccuWeather Senior Weather Editor Jesse Ferrell. Two ice storms hit the Tar Heel State within a week of each other, with the first hitting on Feb. 12-13 and knocking out power to 170,000 customers in the northern part of the state, and the second on Feb. 18-19, which coasted along the western and northern part of the state, cutting the lights for 26,000.

For the Charlotte, North Carolina, area, and South Carolina, a widespread, heavy ice event hasn’t happened since 2016. Freezing rain, mainly in the western half of the Carolinas, caused over 1,000 traffic accidents on Feb. 14-15, and was preceded by another deadly ice storm on Jan. 22-23 that knocked out power for nearly 180,000 customers across the two states. 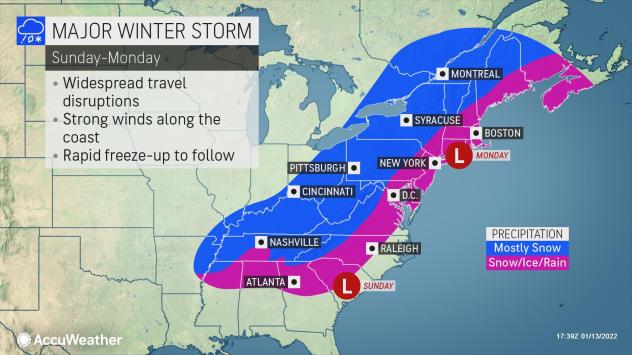 Nashville, Tennessee, and Lexington, Kentucky, won’t be free of any snowfall this weekend either. Both cities have already picked up more than their average seasonal snowfall to date after the last few storms, Nashville currently recording 8 inches and Lexington close to 10 inches.

“Heavy snow is once again a concern for Kentucky and Virginia,” Adkins said. “At this juncture, the area at greatest risk for receiving heavy snow is across eastern Kentucky and western Virginia, particularly northwestern portions of Virginia.

Depending on how the chips fall with the track of the storm, snowfall could total around a foot for some of these areas, according to Adkins. 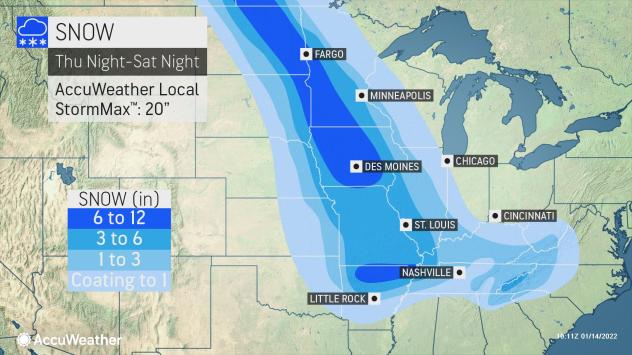 Tupelo, Mississippi, and Birmingham, Alabama, are also likely to see some snow. While there won’t be piles upon piles of snow, up to an inch of a wintry mix on the roads will be enough to create slick travel. Little Rock, Arkansas, and Nashville are both likely to receive at least a few inches of snow with slippery and snow-covered roads.

The snowfall totals around Nashville will be strongly determined by where the storm tracks across the Mississippi Valley and the Southeast, according to Adkins. While snow and rain are currently both in the forecast for the area, a shift in the track could “drastically” alter how much of each Nashville receives.

Even a small amount of snow and/or ice on the roads can lead to dangerous travel from the Interstate 20 corridor northward to I-64. While some ice is possible across the I-95 corridor in Virginia, it’s likely to transition into rain, limiting the magnitude of the ice event in the area, according to Adkins. He added that only a thin glaze of ice is needed to create extremely hazardous driving conditions. 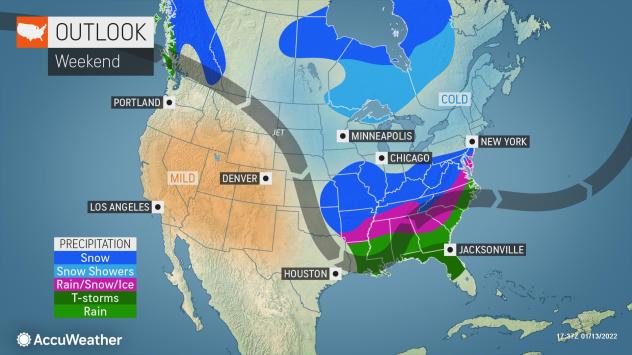 “Cold air could make for a wintry mess for many, regardless of the intensity of the precipitation,” AccuWeather Meteorologist Matt Benz said, referring to the expected impact across Arkansas to Virginia.

AccuWeather forecasters urge motorists to use extreme caution when traveling this weekend over the interior Southeast. Road conditions are likely to deteriorate quickly as the storm unleashes its wintry blast.