To help foster in students an appreciation for science along with improving a little-used section of the school, a Richfield Elementary guidance counselor recently received almost $2,000 as part of a Bright Ideas grant sponsored by Union Power Cooperative to create an outdoor classroom for students and teachers to utilize.

“I’m always looking to improve areas of our school that are not used and need some sprucing up,” said Drew Laucher, who applied for the grant.

Originally from Michigan, where he received a degree in biology and sustainability from Western Michigan University, this is in his eighth year at Richfield and 17th year overall with Stanly County Schools. He has previously received a few other education grants from local organizations, including the Albemarle Rotary Club.

The classroom will be outside the K-2 building and feature weather-related instruments students will be able to learn about and work with, including a barometer, thermometer, hygrometer, a wind speed indicator and a rain gauge. There will also be raised gardening beds for the creation of a small community garden (teachers will receive donations to purchase seeds) and the school will plant a type of Japanese maple, where the color of the leaves will change with each season.

“I wanted something that kids could really see and observe,” he said regarding the idea to plant the maples.

The plan, Laucher said, is to have the outdoor classroom completed before the end of the school year, hopefully by May.

Laucher worked with the school curriculum coach Ann Miller to make sure topics that can be derived from the classroom, such as learning about the weather and life cycle of plants, would be applicable for all grade levels.

“These are concepts that are taught all the way through K through 5,” he said.

He applied for the grant in the fall and did not hear back until late November, when a representative from Union Power Cooperative presented him with a check.

“I was moved to happy tears because it was just a really welcome surprise in what has been a very tough couple of years,” he said, noting he was surrounded by at least 60 kindergarten students when he learned he would be receiving the grant. 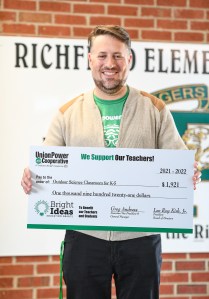 Drew Laucher received close to $2,000 to create an outdoor classroom where students will be able to learn about scientific concepts including weather and the life cycle of plants. Photo courtesy of John Huneycutt.

Laucher said many students are excited about the classroom, having eagerly inquired to him when the project would be complete.

Above all else, Laucher hopes with the addition of the classroom that students will take control of and personalize the space as they best see fit.

“My main goal is to get kids involved in improving their school so they can have some ownership,” he said. “They can always come back and see some of the work that they’ve done and say, ‘I’ve helped with that.’ ”

This past year, Union Power Cooperative awarded $21,000 in Bright Ideas education grants to 12 local teachers across four counties, according to its website, including one at Central Elementary and another at Oakboro Choice STEM, to fund projects for their students. In total, the projects will impact more than 5,000 students.