While it can take some people many years to figure out what they want to do with their life, Jesse Huneycutt was in the third grade when he realized his career dream. A highway patrolman spoke to his class about what it was like to be in law enforcement and Huneycutt was instantly hooked.

“I knew right then and there that’s what I wanted to do,” he said.

After more than 30 years of service with the Albemarle Police Department, Huneycutt, 55, is set to retire from the force at the end of the month. His last day will be Jan. 28.

Looking back, he said the reality of the job has far exceeded his initial thoughts as a young child.

“There’s a lot more I got out of the job I think than I could ever anticipate,” Huneycutt, the assistant police chief, said. “The city has really given me a great opportunity to learn and expand my capabilities.”

He had been thinking about retirement for a few years, but wanted to wait until he got to 34 years with the department.

“I will definitely miss being a police officer. I have enjoyed the ride, but it’s time to move on,” he said.

Huneycutt has been with APD since March 1988 and he has worn many hats while working his way up the police department chain. He was sworn in as a patrol officer, then became a patrol sergeant, captain and finally assistant police chief in 2016. He also served a brief stint as acting police chief following the retirement of Danny Bowen in 2019. 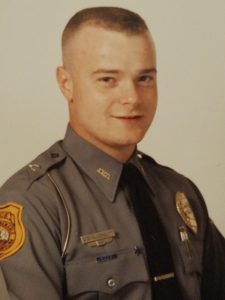 When looking back at his 34 years on the job, what stands out to him has been all the opportunities he’s had to interact with and help the public, even during moments of great stress or difficulty, such as talking to someone after a car accident.

“You’re there to help, it’s all about customer service and being able to get that person through that traumatic event,” he said.

Huneycutt especially enjoyed getting to know people during his time as a motorcycle officer, noting that people seemed more engaged and open when he met them on his bike compared to when he interacted with them in his traditional vehicle.

For about a decade, he also spent time motorcycle classes to the general public, both in the county and across the state. “That was a really great opportunity as far as community involvement and community outreach,” he said.

Albemarle Mayor Ronnie Michael, who worked for more than 20 years with Huneycutt, partially as police chief, said he has been a “very dedicated officer to the department, to the personnel and especially to the community.”

“He would go out of his way to do anything for anybody he possibly could,” Michael said. “He was a valuable asset and we will definitely miss him in the police department.”

While he will be retired from active duty as an officer, Huneycutt will still be involved with law enforcement. He will be assisting SCC’s BLET director Christi Buchanan with the college’s training program. He’s been working as a BLET instructor at the college since 1995.

“I look forward to this newest chapter in life’s highway, to still work for the community and the law enforcement profession just in a different venue,” he said.

In addition to his role helping to train future officers, Huneycutt is looking forward to spending more time with his family, gardening and spending time in the mountains and on the coast.

“I’m just looking forward to more of that family enrichment time,” he said.

There will be a reception for Huneycutt from 2-4 p.m. Friday at the police department headquarters.