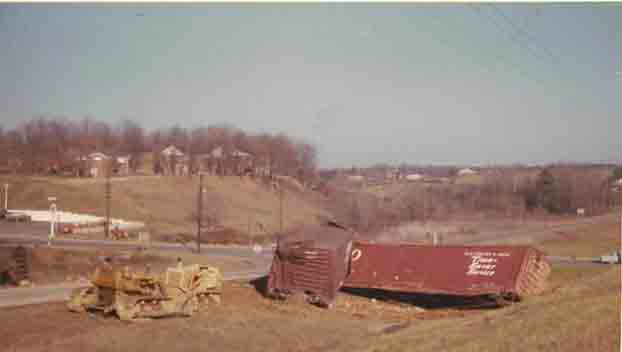 According to Stanly County native Ritchie Hearne, Albemarle experienced some unusual excitement on Monday, Dec. 23, 1963. Several newspaper accounts of the time shared the story of a locomotive that was moving several railroad cars around the Collins & Aikman plant north of town.

Several of the cars broke loose and headed south along the tracks. The engine attempted to stop them but were unsuccessful. It was estimated the runaway cars reached 30-35 miles per hour and passed through 17 railroad crossings as they sped south through Albemarle.

The first cars eventually crashed across an embankment on the south side of town. Several ended up on the on ramp to Highway 27. Fortunately, no one was seriously hurt.

Today’s photo, courtesy of Gavin Poplin, shows several of the railroad cars after the crash.