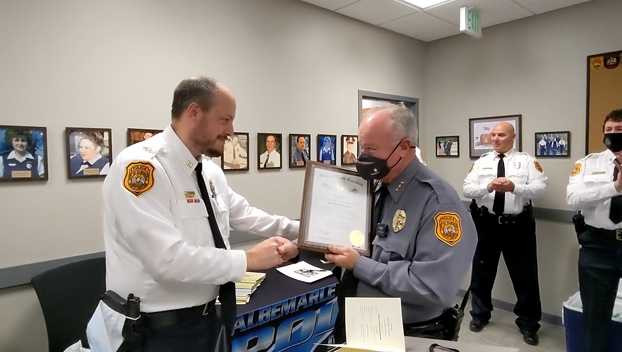 Albemarle Assistant Police Chief Jesse Huneycutt received The Order of the Long Leaf Pine award on his final day on the job Friday.

Since 1963, North Carolina’s governors have reserved their highest honor for persons who have made significant contributions to the state and their communities through their exemplary service and exceptional accomplishments.

Huneycutt began a law enforcement career with the Albemarle Police Department in March 1988 as a patrolman.

In 2015, Huneycutt was promoted to the rank of assistant chief of police, and has remained in that capacity.

Huneycutt’s career with the Albemarle Police Department includes several professional achievements. He has been named an Albemarle Police Officer of the year. He is a four-time recipient of the Fraternal Order of Police – H. Ardell Simmons Service Award.

He has also served in a variety of specialized assignments including motorcycle patrol, special response team and field training officer.

For more on his career, view this feature.