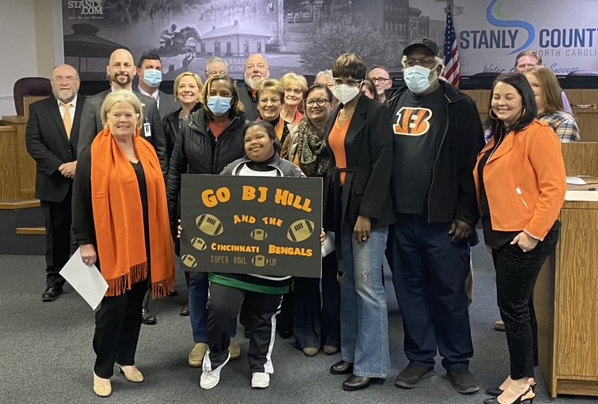 School board members, West Stanly High staff and family members of B.J. Hill gathered to show support for the Cincinnati Bengals during Tuesday's school board meeting.

Members of the Stanly County Board of Education showed support to Cincinnati Bengals defensive tackle and former West Stanly High standout B.J. Hill during Tuesday’s meeting by wearing black and orange colors and participating in the “Who Dey” chant.

Hill made a key play during Sunday’s AFC Championship game, intercepting a pass from Kansas City quarterback Patrick Mahomes in the third quarter which led to a touchdown and two-point conversion that tied the game. The Bengals ultimately rallied from an 18-point deficit to beat the Chiefs 27-24 in overtime to head to the team’s third Super Bowl in its history, where they will take on the Los Angeles Rams.

Aside from his interception, Hill, 26, finished the game with four tackles and half a sack on Mahomes.

“I think we are all Bengals fans and we are ecstatic that B.J. and the Bengals are going to the Super Bowl,” chairwoman Glenda Gibson said. “Stanly County Schools is so so proud of B.J. Hill.”

Following Gibson’s comments, board members left their seats on the dais and, with the help of Hill’s family and West Stanly staff, took part in the popular chant that can be seen here: “Who dey, who dey, who dey think gonna beat dem’ Bengals?” They all then responded: “Nobody!”

Myra Hill, Hill’s mother, who works at West Stanly, encouraged all of the district’s high schools to wear the Bengals colors of orange and black to show support for her son.

Hill’s aunt joked that as a bus driver who wakes up early each morning, she would like the schools to be closed the Monday following the Super Bowl.

Everyone then took a picture in front of a black and orange poster that read: “Go BJ Hill and the Cincinnati Bengals.”

Hill played at NC State University before getting drafted by the New York Giants in 2018. Having been traded to the Bengals last year, he recorded 50 tackles and 5.5 sacks this season.