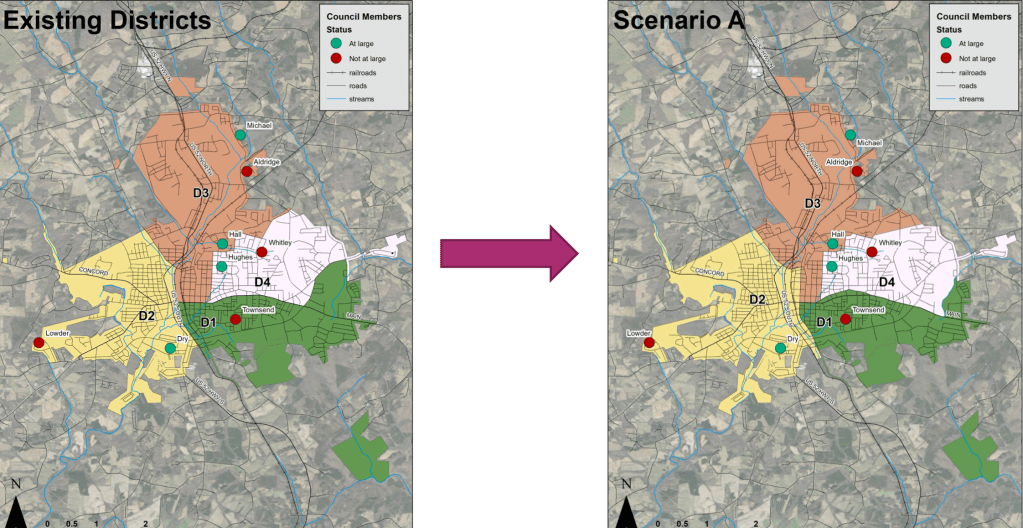 The new redistricting plan, if approved, would only slightly deviate from the current one.

The Albemarle City Council approved a new redistricting plan during its meeting Monday night that should allow the city’s four districts to be redrawn ahead of the general elections in November.

The process of redrawing districts happens every 10 years following the results of the U.S. Census, which was completed in the fall of 2020. Due to delays caused by the COVID-19 pandemic, the Census Bureau did not send its redistricting data to states until last fall.

Each of the city’s four districts’ populations should be within five percent of the ideal district population, determined by the 2020 Census, and one needs to be at least 50 percent African-American due to a 1988 settlement with the NAACP. Since the city’s population increased by 3.3 percent to 16,432 residents over the past 10 years, each district should aim for a population of 4,108.

The law requires the same number of people to be in each district within a range of 5 percent of the ideal population.

To make sure all four districts had similar populations, ensuring each resident had equal representation, City Manager Michael Ferris presented council with the proposed redistricting plan: District 1 would lose 353 residents, District 2 would gain about 223 residents, District 3 would lose 80 people and District 4 would add 210. By redrawing the districts, each would be less than one percent off from the ideal population.

Under the new plan, the majority Black population in District 1 would increase from 50 percent to 53 percent.

Population changes in Albemarle’s 4 districts if the proposed redistricting plan is approved.

“Given the other criteria that we’re legally required to work with, that’s a fairly good job of trying to get the population balance right,” Ferris said of the plan.

A public hearing will be held Feb. 21 to adopt the final redistricting plan. Once approved, the plan will be provided to the Stanly County Board of Elections on or before March 1.